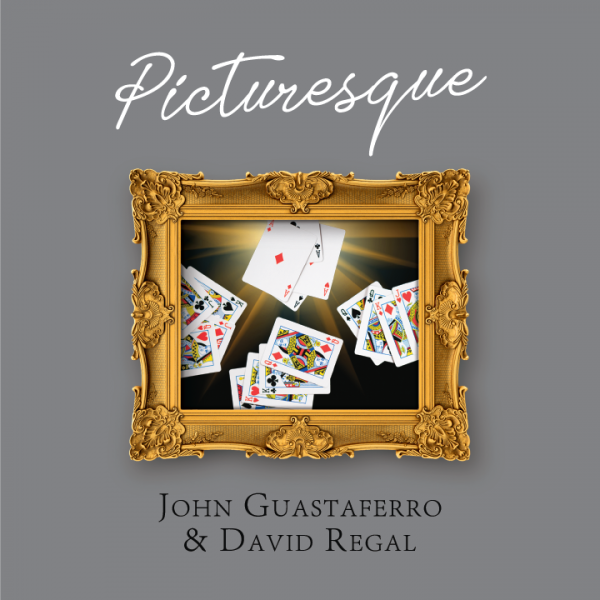 One of the best tricks of all time, now better than ever….

One of the best tricks of all time, now better than ever. Four aces disappear and reunite. IN FULL VIEW. Plus 2 bonus tricks!

“Such a significant leap in overall clarity. The ‘one degree’ here truly is GOLD !” – Shannon Clark

McDonald’s Aces is a classic in magic. Aces are distributed into four separate packets of cards, and with a magical gesture, the aces are transported to the leader packet. The effect is clear, and the gimmicks make the effect absolutely impossible. John Guastaferro and David Regal have joined forces to create one of the most elegant and magical solutions to McDonald’s Aces. This is Picturesque by John Guastaferro & David Regal.

The core routine of the project is John Guastaferro’s effect Picturesque. This unique handling of the McDonald’s Ace Assembly is beautiful, fooling, and in a word; Picturesque. John has reworked the classic classic routine into a masterpiece that incorporates the twelve court cards with the Aces. This distinctive approach makes the routine more elegant, meaningful, and beautiful to watch. The switches, displays, and counts are all motivated and choreographed to make the effect almost a ballet of card magic. The best part is that it’s easy to perform for magicians of all skill levels.

Vino Royale: a parlor version of the Picturesque effect using wine glasses where the magic happens with the clink of a glass.

Royal Gathering: David Regal’s approach to Picturesque where not only do the aces assemble, but the court cards also gather into their own discrete packets even though they have been thoroughly mixed.

Along with all three routines, you learn brand new vanishes that you can apply to your own McDonald’s Aces routine. The gimmicks are included for all three routines, as well as a gorgeous vegan leather wallet that is perfectly sized to protect your gimmicks and serve as an elegant case to produce your trick from in performance. If you’ve never performed an ace assembly before, this is the perfect entrance to one of the best card tricks in magic. If you already perform McDonald’s Aces, you will learn to turn a trick into art that is, in a word, Picturesque.