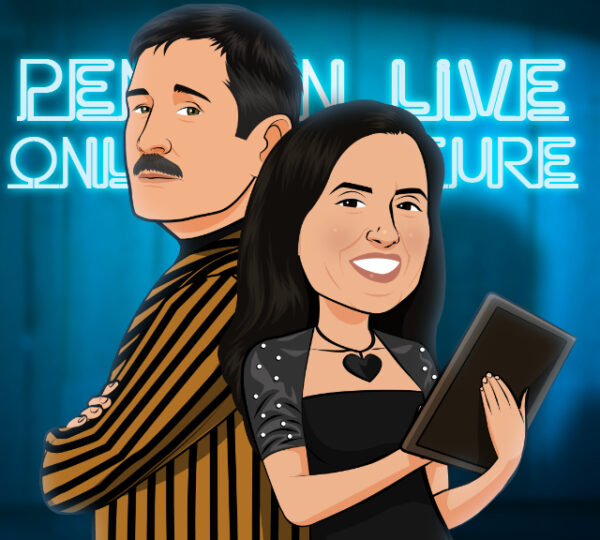 “I learned more about the real-world application of proper scripting and character development by watching Christian and Katalina’s show than I had in years of advice from books and downloads. This is not a “1 trick and forget about it” lecture…. this is something you will come back to again and again. It is rare to find people like Christian and Katalina who are experts in both the “show” (scripting, effect selection, audience management) and the “business” (marketing, customer service, building a profitable show) sides of show business. They are teaching the stuff that can only be learned from years and years of trial and error.”- David Corsaro

“Personally, I would love to poison Christian for releasing Poison – such a great trick – to the masses. Buy this before he realizes what he has done.”- Steve Bargatze

“When you hear “the Mentalist” what image does that conjure up? Does the image of a stuffy old man dressed like Mr. Monopoly come to mind? Well, when Christian and Katalina walk on stage they not only dispel that imagery, they shatter it with their charming and brain-melting expositions of mind reading. If you are looking for impressive practical mentalism to add to your performances, then look no further than Christian and Katalina’s Penguin lecture. You won’t regret doing so.”- Eric DeCamps

What will they teach?

30 seconds- You start dealing cards asking your spectator to make a decision when to say stop within 30 seconds. When they say stop you deal the card they stopped at face down onto the table. They can see that they had a free choice of any of the other cards, but when you turn over the card they stopped at, it has a special message predicting they would stop at that exact card.

Painter’s Poker- An amazing mind reading effect where a spectator remembers one card out of a small packet. The spectator can then shuffle that packet of cards and just by apparently reading their voice and their face, you can correctly identify the card they merely thought of. This one is a real fooler.

Pandora’s Box- A baffling prediction trick where a spectator is given a deck to shuffle which is then set aside. Another deck of cards with a variety of words written on it is introduced. The spectator selects a random word from that deck. That word is used to spell down into the deck of cards they shuffled at the beginning of the trick, and that card matches a prediction that’s inside an envelope that has been on display the whole time. This is not only an incredible prediction trick but allows you to also give a psychic reading to make it a real performance piece.

PDQ- A monster routine where the audience writes down random words on pieces of note cards that are thoroughly shuffled. Each time the spectator picks a card Katalina is able to correctly identify the chosen word, even when her back is turned and the audience members are the ones picking the cards. This is as close to direct mind reading as you’ll ever get.

Poison- is a real performance piece based around the true story of 18th century nobility who would play a ghoulish game where a random dish contains poison. We take all the danger out of it by using envelopes  to create a hilarious and mystifying routine that is part russian roulette, part bank night, and all fun.

Say Cheese- is a great close up prediction effect where you write down a prediction of what words three different people will pick. All three people pick wildly different words from a stack of note cards, and despite the words being completely different your single prediction matches all of them.

Touch Stones- is so much fun to perform it’s almost not fair. A spectator is given a handful of stones while you write down a prediction. They are freely allowed to pick through the stones until they come down to one and hide it in one of their hands. Not only do you correctly predict which color stone they will select, but also the hand. There are so many choices made by the spectators that getting it right seems completely impossible.

Christian and Katalina are a married couple based out of Indianapolis, Indiana.
They have been performing together for the past 22 years. They have performed on Cruise Ships, at Trade Shows, Corporate events, Theaters, and Colleges.

For ten years, Christian and Katalina toured the college market performing at over 1200 college events. For the past 11 years, they have had a residency show at the downtown Hilton Hotel where they have performed 1000 shows.

Christian and Katalina are recipients of the Milbourne Christopher Award for Mentalism. They have also received The Anneman Award for contributions to the art of mentalism. They recently were given the Lou Gallo MVP Award at 4F (Fechter’s Finger Flicking Frolics). Christian was presented with the Leslie P. Guest M-U-M Award of Excellence winner for his eloquence in writing his “Mental Breakdown” column. He also wrote a column called “Working in the Real World” which is now published by Michael Close.