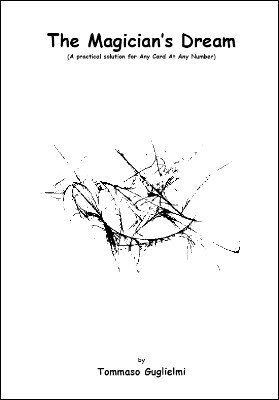 The Magician’s Dream by Tommaso Guglielmi

The Magician’s Dream is a collection of two practical ACAAN’s effects: Random ACAAN,…

The Magician’s Dream is a collection of two practical ACAAN’s effects: Random ACAAN, ACAAN on Demand.

With Random ACAAN, you are able to perform ACAAN effect completly self-working: You can perform it without you touching the deck ever (before, during and after the effect). It works with any unprepared deck.

ACAAN on Demand is a full impromptu one to one ACAAN. This method is pefect when someone, in a informal situation, asks you to perform a magic trick. The method is very pratical and in 95% of the cases it works without you touching the deck from start to end.

Perfect ACAAN on Demand
After informally being asked to perform, the magician replies by simply asking the spectator to name any card and any number between 1 and 52. The spectator is offered the chance to change his mind as many times as he may like. The magician gives the spectator an uncased deck held together by a rubber band. In complete fairness, the spectator counts down to his number to find his card.

Eyes of Darkness by Tommaso Guglielmi