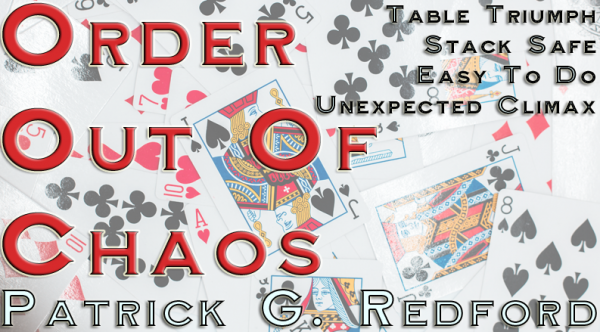 Order Out of Chaos By Patrick Redford

Inspired by So Sato’s “Bushfire Triumph” and Giancarlo Scalia’s “The Ace of Hearts Trick”, Order Out of Chaos is a table triumph where the cards are thrown haphazardly onto the table with cards going both face up and face down. The cards are further “smooshed” around  appearing to mix them even further and upon being squared without any further action, right themselves all to the same orientation…except for a freely named selection! Right when the audience thinks the effect is over, the cards are given one more shuffle and the entire deck is found to have transformed into new deck order.

This technique may be used to secretly maintain a stacked deck or be used as a show piece to have the deck magically return to a new deck order arrangement.  If you don’t know how to faro shuffle, don’t worry! This video will teach you how to finish with a deck of cards in suited order even without having to faro shuffle.