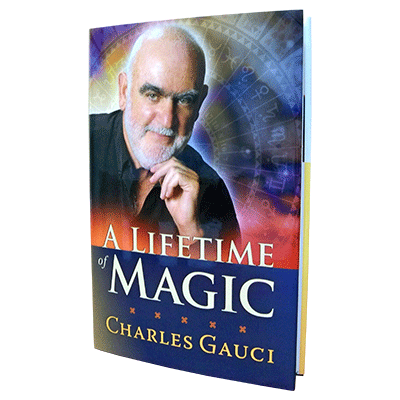 A Lifetime of Magic by Charles Gauci

Make no mistake, this book has the perfect title – A Lifetime…

Make no mistake, this book has the perfect title – A Lifetime of Magic is a life’s work composed by one of magic’s most innovative thinkers and equally brilliant performers. Charles products have sold in the thousands! Why? They are practical, powerful magic that in most cases are easy to perform allowing them to become reputation makers. For years magicians worldwide were happy just to get his products, but now you will not only be tipped to how to make some of these great effects, you will also derive powerful benefits from Charles years of experience as a worker! Charles is one of the best teachers in magic and this is going to be a must have for anyone interested in magic, mentalism and/or psychics.

Charles Gauci reveals his most cherished secrets that have enabled him to make a very good living from entertaining for over 50 years. He has created some of the most practical, commercial magical effects which have sold all over the world and are used by top professionals everywhere.

There are a total of thirteen stage effects which he performs in his “Magic of the Mind” and “Mysteries of the Mind” shows. There are no pipe dreams here but killer routines that are reputation makers. There is enough material to perform two forty-five minute shows ranging from a small intimate audience up to one thousand people.

Both of his shows fit into a carry-on case enabling him to travel everywhere without worrying about lost luggage.

Charles practices what he preaches. With the exception of his memorized deck system, you will be able to perform all of the effects within minutes of reading the instructions. His creations rely on clever subtleties rather than sleight of hand. This enables him to concentrate on presentation.

There’s no padding in this book. The 222 pages are packed with original effects, some of which have never been published before. There are also links to private YouTube video clips of various performances. It is a huge advantage to be able to see how certain effects are performed in front of a lay audience.

In total there are thirty-six effects ranging from stage, close-up, and roving.

I can look you straight in the eye and say that for any professional/semi professional mentalist this book is a must have in one’s library. It has been priced to keep it out of the hands of the curious. Stevens Magic Emporium is the only distributor. No other dealer will be involved. This way we can control distribution to a certain extent. Charles Gauci is recognized by his peers as one of the most creative minds in magic.

In 2010 he was presented with the Dave Lederman Memorial Award for “Creativity in Mentalism” at the prestigious Psychic Entertainers Association convention.

Turning professional at sixteen years of age, Charles very quickly realized that to succeed in this tough entertainment business his act had to be different. Consequently, he began to create new and original routines.

“A Lifetime of Magic” is a treasure trove of thirty-six of his favourite effects from his two professional shows, “Magic of the Mind” and “Mysteries of the Mind.” They include instructions of how to build seven of his top selling commercial effects thus saving you hundreds of dollars.

This book is aimed at the professional/semi professional entertainers. The material is well tried and tested over thousands of performances. You also have access to performance video clips on private YouTube.

It is often said that if you get one item out of a book, then the investment has been worthwhile.

We think that gems such as the C.G.Switch Box, Card Marking System, and his various reputation makers Memory Routines alone are worth the price of the book. Included is his new methodology for performing his best selling “Eye to Eye”

“This may be redundant, but I think Charles Gauci is one of the most creative, entertaining and professional psychic entertainers in the world. His output of killer mental effects constitute some of the most powerful material any mentalist could perform. Most important of all he is a true gentleman and I am proud to call him my friend.”
– Larry Becker

“This book is a must have for any serious mentalist/magician.”With ‘Eye 2 Eye’ Charles created a modern classic of contemporary Mentalism. Therefore I’m sure that Charles will exceed even the highest expectations with “A Lifetime of Magic” with many practical real-world materials and applications.”
– Dr. Ralf Froehlich

“One of the greatest creative geniuses of all time. Whatever he does is real workers material.”
– Nick Belleas, New York City performing mentalist and member of Psychic Entertainers Association.

“Charles’s work in the field of mentalism is legendary. Having been a huge fan of his work for many years I can’t wait to work my way through this amazing book. As a professional entertainer I am constantly on the look out for routines that are commercial, entertaining and very strong. Charles’s work ticks all of those boxes.”
– Paul Romhany

“Charles Gauci is a well respected name in Mentalism. He’s an active member of the prestigious Psychic Entertainers Association and recognized for his leading edge innovations for our community. I’m anxious to review his book – “A Lifetime of Magic.”
– Randy Schostag, Professional Mentalist & Craft Bibliophile, Minneapolis, Minnesota.