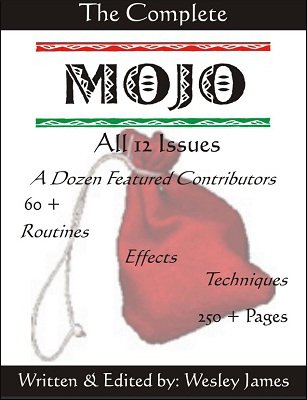 The Complete Mojo by Wesley James

From November 2006 through October 2007 Wesley James—one of the last of the under-ground legends of magic—wrote, edited and released 12 issues of an e-zine containing some of the most sophisticated close-up magic in the history of magic periodicals, all described in Wesley’s inimitably detailed style.

Originally released at $10 per issue, $100 to subscribers, the entire contents of the e-zine have now been re-typeset for easy reading and compiled into one PDF volume at a significantly reduced price.

More than 250 fully illustrated pages, plus a complete index and extensive table of contents. More than a dozen contributors, including a complete Sol Stone issue, 60 plus effects and sleights with cards, coins and other objects, plus essays and tutorials.

List of items (all without a creator name are by Wesley James):

Here’s a more detailed look at the contents of just the first few issues:

Tippler’s Flush, by Wesley James — Based on an idea from Ron Zollweg, the performer makes a prediction by removing a card from the deck and placing it aside. He then removes all the black cards from the deck and, at the direction of a spectator, mixes them in a face-up/face-down condition. The prediction is shown to reveal the number of face-down cards, which are then turned over to reveal a Royal Flush.

Tiger in the Bush, by Wesley James — A variation of William McCaffrey’s Prizewinner, made popular in Eddie Joseph’s Premonition. This version can be done 100% impromptu with a borrowed deck. The only requirement is that the deck is complete. Any card can be named — there is no restricted choice. The title is explained as part of Wes’s presentational hook.

TreAce Sheik, by Wesley James — An addition to the Reset genre, based on ideas from Lee Asher and Aaron Fisher. The four aces instantly transpose with the four kings.

Ace Producer Revisited by Randy Wakeman and Wesley James — Using Marlo’s Ace Producer as a starting point, this handling of the Sleeve Aces plot provides a simple set-up as well as a simultaneous double production of the two final aces.

Funky Jazz Aces by Wesley James — A handling which Wes has kept to himself for close to 35 years, it includes several presentational and technical touches not seen anywhere else. Each of those touches greatly increases the conviction that each ace is where it is supposed to be before it travels.

Jazz Transform by Wesley James — More on Jazz Aces, this time with a double-kicker ending.

I Think, You Thunk by Wesley James — The performer divines three cards merely thought of by spectators. Includes thoughts on justifying procedures that may at first seem less-than-logical.

Poppy’s Playboy Prophecy by Wesley James — The first non-card item to appear in the magazine. A large glass full of coins of various denominations and dates is mixed up and a spectator chooses one of the them. The performer correctly divines both the denomination and the date on the coin. Note that a significant sampling of the coins are dumped into the spectators hand and he may freely examine them to see that they truly do represent a wide variety of dates and denominations, and that the coins are very fairly mixed by shaking them between two glasses.

Visible Twist, by Wesley James — Wes’s variation of Hollingworth’s Waving the Aces, which keeps the hands within the upper-torso frame.

No Questions Asked II, by Randy Wakeman — Randy’s take on Marlo’s Amazing, Isn’t It?, which derives from Mental Discernment/Out of Sight, Out of Mind. Includes a detailed history of the ‘Think-a-card’ plot, as well as thoughts on limiting the selection. As the title suggests, no questions are asked until the card has apparently already been located.

Out of Sight Discernment, by Wesley James — Wes’s refinements on Randy’s effect.

Nova Sight, by Matt Sedlak and Wesley James — A variation on Walton’s Oversight, where the four aces visibly vanish when dropped face-up upon the deck, only to be discovered when the magician deals out several poker hands, and all the aces appear face-up in his own hand.

I’ve Got A System, by Carl Albright — A presentation for John Kennedy’s Red Black, which gives three successive reaction points at the climax, each building on the one before it.

A Lifetime of Magic by Charles Gauci