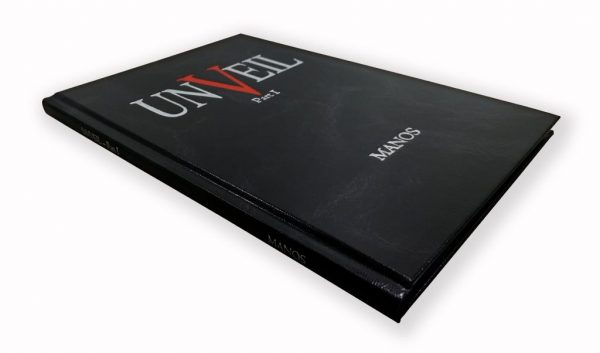 MindFX is very proud to bring you the latest collection of effects fresh from the mind of Manos Kartsakis (author of V & V2). Between the pages of this beautiful hard cover book Manos teaches five of the most powerful routines within his repertoire.

There are no language restrictions for any of these effects and the routines included will play equally as well on stage as they do for a more intimate audience. The first print run is limited to only 500 copies.

Brick Opener:
This routine utilises my controlled coin toss technique. Unlike similar techniques where the coin is spined on a table, in this technique the coin is tossed in the air where it clearly spins uncontrollably until you catch it again. It looks 100% identical to a legitimate coin toss but you will be able to control the outcome every single time with 100% accuracy. The applications of this technique are truly limitless.

Drawing a blank:
This is the peek method I have been using for more than 10 years and it has never failed me. The challenge I set to myself when creating this was to be able to leave the room when the spectator writes something down on a card and when I return clearly state that I am not going to touch it again. Then tell them what they are thinking. This is as close as I got to that goal. The card never goes in an envelope, wallet or anything else and the routine feels completely hands off. Points to consider:

Real which hand:
The cleanest approach to the plot I could come up with. The spectator can place any object in one of his hands behind his back, you even tell them which hand most people put it in and they have a completely free choice to switch or not, and then without asking them any questions about which hand they placed it in or if they switched or not, you always know where the object is. No truth teller/liar plot, no gimmicks necessary.

ProMetheus:
My favourite which hand routine. Can be performed on the biggest stage or at the beach. Two spectators take part, they hide a coin in one of their hands. You ask each of them a single question (Is it in this hand ) to which they can lie or tell the truth and then you ask them to think of a different word depending on the location of the coin (If it’s in this hand think of “x” if it’s not think of “z”). You can immediately tell them which word they are thinking, where the coin is, who was lying/telling the truth and as a kicker, you reveal a prediction that will leave them stunned.

Essay: Prop-less or More :
An essay describing my thoughts on what organic magic/mentalism is as well as the benefits/drawbacks of using propless methods or traditional methods.

Invisible Die:
An invisible die is handed to the spectator who rolls it and makes a choice depending on the number that comes up. This routine enables you to force the choice the spectator makes and also show that you have predicted the number he rolled.

Note:No props are supplied with this book – one of the routines within this book requires a two way envelope (or similar) which may be made available from MindFX in the near future.