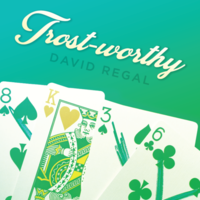 No extra cards, nothing hiding in your back pocket. You and a…

No extra cards, nothing hiding in your back pocket. You and a spectator trade cards and they’re a perfect match!

“There is a hard core of genius in Nick Trosts’s ‘Copycat’ and David Regal has sharpened it to a diamond point in TrostWorthy. If you like B’Wave, you’re gonna love this.” – Curtis Kam

“David Regal’s Trostworthy is most worthy of your consideration! It’s a gimmick free stand up version of you do as I do…and you should definitely do this!” – Cody S. Fisher

“David Regal has taken a classic effect and made it that much better with wonderful subtleties. Simple and powerful!” – Cameron Francis

A multiple climax effect from David Regal that requires no sleight of hand and leaves your audience stunned. Trost-Worthy doesn’t even use a whole deck. Just eight cards, no gimmicks, and a couple of clever principles and you will get fireworks with this killer packet trick.

David Regal has taken a classic packet trick and added the kind of details that not only make this easy to perform but a memorable experience for anyone who sees it. If you need a fast trick with just a few cards to make an impression, put your trust in Trost-Worthy.

Not This. This! by David Regal