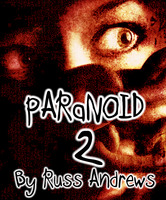 Paranoid 2 is the latest release from Russ Andrews. Hot off the…

Paranoid 2 is the latest release from Russ Andrews. Hot off the heals of his massively popular first release Paranoid, Paranoid 2 starts where the other left off with more amazing yet easy to do effect

All of these effects have been developed in the real world in real working situations so you know these aren’t ideas thought of in a bedroom and written up, they really are tried and tested against some of the toughest audiences to perform to (Russ is a nightclub magician!).

Included in these notes you will find a mixture of magic and mentalism blended together to create, thought of card plots, a psychological influence effect and a crazy way to deal with Hecklers.