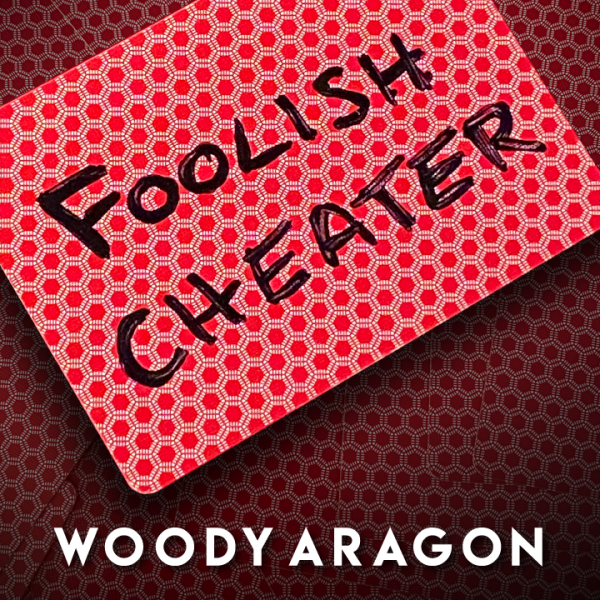 An utterly baffling, 3-phase, 8-minute full act using the most hilarious marked deck you’ve ever seen. It’s as fooling as it is funny.

A revelation, a card at any number, a poker demonstration, and one ridiculously marked deck of cards. This powerhouse routine by Woody Aragon is baffling, hilarious, and practically self-working. This 8-minute routine will get laughs and gasps from your audience through all three of its phases. This is Woody Aragon’s The Foolish Cheater.

The magician introduces a deck of cards he got from the world’s worst card cheat. The cheat marked all of the cards in a very obvious way. As the deck is examined the marks are seen to be big permanent marker on the back. Some of the marks are the actual card, others are drawings and other nonsense like a “tree of clubs”. The marks can be useful. First, the magician has someone think of a card from the pack. Then after the deck is shuffled a second spectator cuts the deck and adds the value of the two cards at the cut. The cards are counted down to the position of that number and the card found there is not the spectator’s card, but written on the back of that card is the card the first spectator was thinking of. In the second phase, a spectator freely selects a card from the deck and hides it away. The marks progressively help the magician determine the identity of the card. First, the marks tell the color, then the suit, then the actual value of the card. Impossibly the marks are correct even though it was a free choice. Finally, the third phase is a poker demonstration. After the cards have been shuffled a round of poker is dealt, and the magician ends up with a straight flush. The straight flush is turned over to reveal the marks on the back have another trick up their sleeve. They spell the word “Order.” The rest of the cards are turned face up and the deck is discovered to be in complete new deck order.

There is a lot of magic that happens in this routine with minimal sleight of hand. Perfect for an evening out with friends, or even a more established piece in a formal close-up show. Woody teaches everything you need to know to make this madcap routine magical for everyone. Woody also teaches you how to apply the marks to your own deck, so that you can perform this with your favorite back design. Plus, there is lots of room for you to add your own personality and jokes to make The Foolish Cheater a highlight in your show.