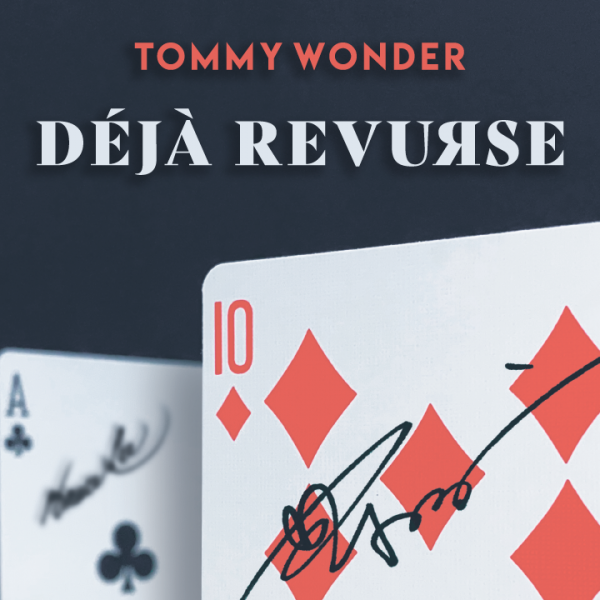 Tommy Wonder was an incredible performer, well-known for his smooth sleight-of-hand, masterful…

Tommy Wonder was an incredible performer, well-known for his smooth sleight-of-hand, masterful misdirection, and devious devices. And now, a modern master of magical creativity shares his favorite Tommy Wonder creations with you as Dan Harlan presents “The Best of the Books of Wonder.” Lesson 8 is ​Déjà ReVurse, an amazing move from Tommy Wonder expanded into a routine where a card repeatedly turns over and then transposes with another spectator’s signed card.

The special move at the heart of this lesson is so cool, you’ll love rehearsing it just to fool yourself in the mirror! Once you master it, you’ll have an engaging routine in which to feature it. First, a selected card reverses itself in the middle of the deck. Yes, we’ve seen that one before, but this time it’s different. When the card has been turned face-down, it instantly appears face-up again! Once again, it’s cleanly turned face-down, only to stubbornly appear face-up! Fed up, the card is removed from the deck, but it still appears face-up in the deck! Oh, and the card removed? It changes to a second selection! This nifty little routine requires no gimmicks.

Déjà ReVurse​ is the kind of routine that will elevate your card magic by learning new principles and sleights that will also be able to apply to your other effects. This fantastic routine, expertly taught by Dan Harlan, is a real worker that you will actually perform. Subscribe to the entire series today and elevate your magic with the best of The Books of Wonder.