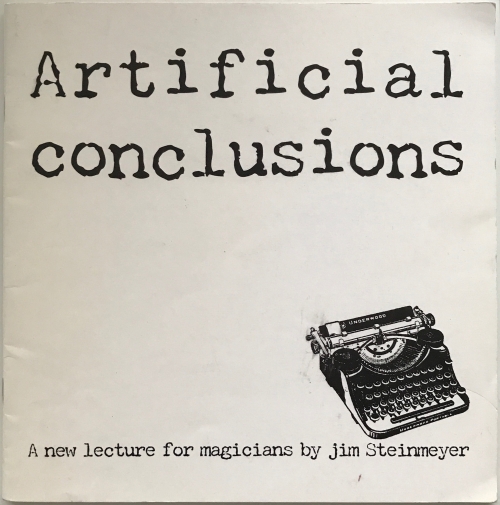 So you thought that Jim Steinmeyer was the most influential illusion inventor of the late 20th century, a consult-ant to magicians from Doug Henning to David Copperfield to Ricky Jay, the author of a series of articles on platform and parlor magic, a creator of illusions and effects for Broadway and Disney, a writer and producer of television specials, a co-producer of the Los Angeles Conference on Magic History, an historian and author and designer of authoritative and beautiful books like Jarrett and The Magic of Alan Wakeling, and the author of several of the most thoughtful books ever written on illusions, including Device and Illusion and Art & Artifice, along with an about-to-be-released book for the public?

In this new set of lecture notes, Mr. Steinmeyer presents “nine playing card mysteries for stand-up or close-up performers.” The first routine is a version of the “Princess Card Trick” (not the one with the five cards that’s all over the Internet, but the other one—the one that Peter Tappan’s wonderful booklet, The Impostress Princess is about). If you are familiar with the traditional workings, you will find Mr. Steinmeyer’s distinctly different and therefore of interest, including the fact that one deck accomplishes all the work, and how he has altered the matrix so that the spectator makes two identifications instead of three.

“Into the Next World” is a take on Paul Curry’s “Out of This World” which allows for a straight deal-through of the entire deck “Advanced Teleportation” is a deceptive card transposition that relies on an interesting combination of subtle methods. “An Open and Shut Prediction” is the author’s take on Curry’s “Open Prediction,” a perennial challenge which, in this iteration, involves the addition of a second deck “Soft-Shoe Monte” is a very good platform Monte routine that will require some initial construction for the very clever and convincing gaff. “A Most Mysterious Case” is a version of apparently withdrawing a standard deck from a miniature card case; not only is this a very useable approach, but the details on making a perfect miniature case are excellent. “The Allergic Card Trick” is a hands-off approach to the classic “Cards Across.” “One Rule of Matrix Poker” is an odd packet trick of sorts, based on a platform item of Alan Wakeling’s. And finally, “Through the Trapdoor” is a strange and visually striking effect in which one playing card repeatedly penetrates through another.

The booklet, as with everything Mr. Steinmeyer seems to touch, is simply but elegantly designed, a far cry from most items we find labeled as “lecture notes.” The author is one of the very few in our world of magic who is truly a skilled and accomplished writer, and as such his work is a pleasure to read for the sake of reading. Although he readily acknowledges that he is not a professional performer. and thus has in some cases not worked out all the details of performance that professional use will require, nevertheless he offers some clever ideas about presentation, the best of which has to do with his ability as a writer and wordsmith.

I would quote a few of my favorite turns of phrase, but I’m hoping no one else will notice them. Along related lines however, Mr. Steinmeyer’s two-page introduction is as contemplative and worthy a theoretical essay as any of us could hope for, and will bear more than one reading. The title of the manuscript concerns its opening lines: “It’s all about the evidence. You present the evidence to the audience and hope that they’ll jump to an illogical conclusion because and this is the truly strange part that illogical conclusion makes the very most sense.” What a remark-ably cogent description of our work! Elaborating on this idea, he adds, “Without the clues, the presentation, the gentle hints and the occasional belt over the head, any one of these routines has the potential of being tedious, annoying, pooling or merely some sort of trick. It’s another continuum. The magician’s goal is to take it far beyond any of these, more than just a novelty. A miracle. Even the most beautiful diamond in the world benefits from a bit of `presentation.’ It looks like almost nothing in the dust of a parking lot, but sparkles extra brightly when a man in a three-piece suit leans forward over the glass counter, pauses dramatically, and deposits it on a black velvet pad.” Need I say more?