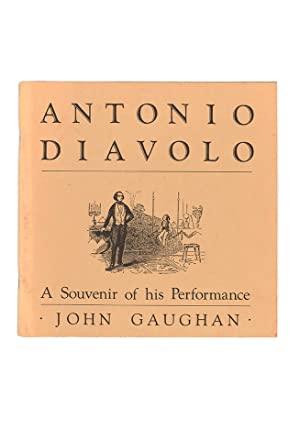 Antonio Diavolo: A Souvenir of his Performance by John Gaughan & Jim Steinmeyer

Limited to 500 copies. Brown pictorial wrappers, Illustrated, with a tipped in…

Limited to 500 copies. Brown pictorial wrappers, Illustrated, with a tipped in color photograph. Signed by John Gaughan and Jim Steinmeyer. Some soiling to covers, else in very good condition.

John Gaughan, in addition to being one of the world’s premier illusion builders and designers, is also an extraordinary restorer of antique automata. At the previous L.A. History Conference, two years ago, we were treated to a performance of Balsamo, the Talking Skull, in partnership with non-automaton Max Maven. At that same conference we also witnessed a marvelous automaton pheasant. This year, Mr. Gaughan introduced us to the automaton clarinet player, who is still in the process of being restored.

Even if you missed the 1986 conference at which Mr. Gaughan presented Robert-Houdin’s extraordinary acrobat automaton, Antonio Diavolo, anyone who witnessed it years ago on a Ricky Jay television special will likely never forget it. That this incredible little mechanical doll performs elaborate maneuvers on a trapeze, jumping completely off at the finish, is remarkable enough; that he does so without means of electricity stretches the bounds of believability.

When Mr. Gaughan first presented the painstakingly restored acrobat at the History Conference, he also published (along with his co-author, Jim Steinmeyer) a lovely monograph on the subject. Limited to 500 copies, the authors have now released a second printing. This beautiful manuscript describes the automaton’s performance, and explains and illustrates the extraordinary mechanics behind it.

Be the first to review “Antonio Diavolo: A Souvenir of his Performance by John Gaughan & Jim Steinmeyer” Cancel reply