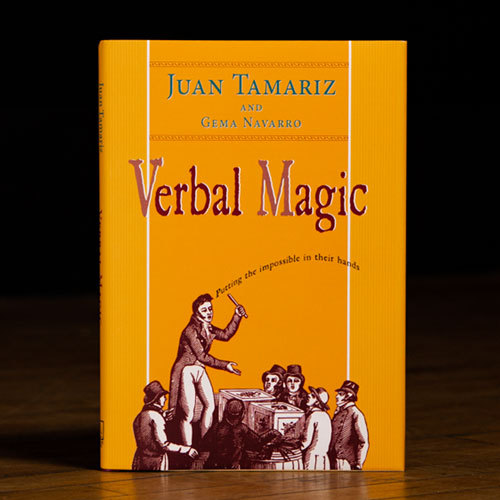 The best interactive magic book of all time is back in print,…

The best interactive magic book of all time is back in print, and it’s never been more valuable. Perfect for everything from live shows to Zoom.

“Juan Tamariz is a master of many aspects of card magic, and one of his unique areas of mastery is the ability to take card routines that rely on simple and often sleight-free methods, that produce effects that are largely intellectual rather than visceral or visual, and yet put them across effectively and make them connect with people. Tamariz developed and refined these skills many years ago when performing a weekly series of magical broadcasts over radio, that involved the spectators in their own homes, using playing cards or other simple materials. “Verbal Magic” is a unique instruction manual for how to makes such material work for remote audiences at a distance — whether over the radio, in virtual performance, or over the telephone. This is not just a collection of such material, but it is a guide to how to transform such material into actual real-world performance.” – Jamy Ian Swiss

“Verbal Magic is a masterful treatise on how to turn mathematical and procedure heavy effects into strong performance magic. These are exactly the kind of effects most of us would have passed right over if we encountered them unadorned in the literature, but see as treasure now that they’ve been given the Tamariz treatment. Over the radio as Juan used them, over the phone if you’d like, or through the internet—if you perform remotely, for people at a distance, this book will be a resource you’ll return to again and again.” – Eric Mead

“I am amazed that there are still magicians who don’t own Verbal Magic. Juan Tamariz designed these tricks for radio, and they’re perfect for that, as well as over the telephone. But most importantly, these can be—and should be—done in person, with the spectators doing everything. We all know that magic that happens in the spectators’ hands is the most powerful kind there is. This book is, by definition, full of the most powerful magic there is. A must-have.” – John Lovick

“I really love Juan Tamariz’ Verbal Magic. I saw most of the tricks live, with Juan, at the radio studio. Not only were the tricks killing everyone in the studio, but the responses from listeners was simply incredible! These are miracles that can be performed by simply listening to the instructions or by watching them virtually. A masterpiece in thinking.” – Gaetan Bloom

“I love Verbal Magic. I think today more than ever Verbal Magic is a very important book for magic that defies the limitations of distance. And an important lesson in directing your audience.” – Asi Wind

“The power of the mind emerges verbally from Juan Tamariz and controls his spectators into convulsions of amazement.” – Richard Kaufman

“Verbal Magic is the solution to how you set yourself apart from other magicians who are performing virtual magic. The book contains a wealth of effects that will allow your audience to perform magic in their own hands as they follow your visual and spoken instructions. Your spectators become an integral part of your magic and isn’t that what magic is supposed to be about?” – Martin Kaplan

“People think I’m an expert on the field of interactive magic but, frankly, it’s time to confess… I’m a fraud. EVERYTHING I learned about tricks, procedures, and how to create and present this kind of magic I learned from the master Juan. Verbal Magic is a reference for this type of magic that is so apropiate in these times. And this book is very fun to read as you can do all the tricks while following the instructions and feel the magic yourself. SUPER-RECOMENDED!” – Woody Aragon

“One translation of the word Abracadabra is, “I create as I speak.” Juan Tamariz has transformed this from an idea into reality with his book Verbal Magic. It is filled with magical, practical, poetic ideas that can teach you how to make “magic words” a reality.” – Michael Weber

“Some years ago, I was lucky enough to sit in an audience when Juan Tamariz performed one of the tricks from Verbal Magic. It was the most electrifying experience I’ve ever felt in a magic show. The whole audience was actively and emotionally involved, having a wonderful time and feeling the mystery, both as a group and individually. The material in Verbal Magic is capable of affecting all kinds of audiences in ways traditional magic rarely attains—remarkable material.” – Stephen Minch

When it happens in their hands –

It’s an old adage of conjuring: The strongest magic happens in the hands of the audience.

A lesser-known corollary to this is: The more that happens there, the stronger the magic.

So what if it all happened in their hands?
What if the magician wasn’t even in the room?
What if only his voice were guiding them…
From the radio – or the television – or from far away?
– and the magic happened while they did everything!

That is what Spain’s greatest magician, Juan Tamariz, asked himself. And from this question sprang a body of magic that has astonished vast audiences in Spain and Latin America when performed on radio and television, on stage and close up. It is magic that has fooled both the public and master magicians.

Using only a few playing cards, pieces of paper and other common objects as props, audiences are led through a variety of entertaining processes that lead to their utter amazement. Through clever principles, old and new, combined with cunning psychology and ground-breaking strategies, Juan Tamariz makes magic happen in everyone’s hands. He fools people into amazing themselves! Further, as you follow the radio transcripts in these pages, he will fool you, too.

So open this book and join the amazed. Then share the amazement and fun with your audiences, whether they are listening to the radio, watching television or in the room with you.

Follow along as Juan Tamariz tells you to take a few red and black cards from a deck and mix the colors in ways random, chaotic and independently determined. Yet, when you are finished, the colors magically separate! That’s right, you perform Oil and Water for yourself and have no idea how it happened – just as thousands of people have done while listening to Juan Tamariz over the radio, on television and in live audiences.

People freely choose a card, lose it in a packet, mix the cards thoroughly, and then magically discover their own selections-without knowing how they did it. The magic leaves Tamariz’s hands and settles in their own!

This book collects over forty such tricks and presentations, all refined and tested through professional performance. Close associate Gema Navarro, under the guidance of Juan Tamariz, has meticulously transcribed presentations from tapes of numerous radio broadcasts. The transcripts are so detailed, they first let the reader fool himself, and then give him the information necessary to entertain and astonish his audiences, and the tools to devise many other effects that happen entirely in their hands and heads.

Scattered in the literature of magic is a scant number of participation effects suitable for performance on radio and television; and those tricks are sought and coveted by professionals. In Verbal Magic Juan Tamariz reveals the largest body of such magic ever offered, while taking it in new directions and teaching new principles with wide-reaching possibilities for further application. He also shows that this type of magic is just as astonishing when performed close up and for theater audiences. As a final bonus, Verbal Magic provides the largest record yet, for non-Spanish speakers, of what it is like to be part of Tamariz’s audience. Here is a long, in-depth look at how a master magician simultaneously entertains and mystifies.

The Books of Wonder by Tommy Wonder 2 Volume Set