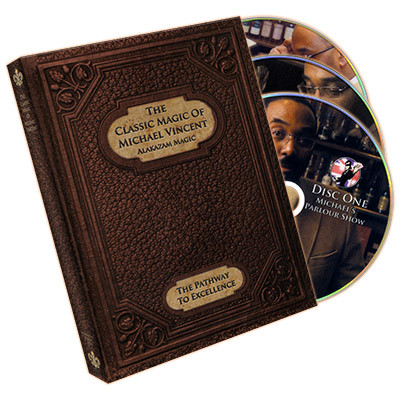 The gentleman card magician FINALLY on a gorgeous 3-DVD set. Michael Vincent is one smooth cat!

Once in every generation is born an individual whose work becomes known worldwide as a touchstone for excellence. With the hands of an artist and the soul of a poet, Michael is just such an individual.

His sleight-of-hand is masterful, his presentations are inventive and his performances are the epitome of class and sophistication.

As the only magician in history to have won the prestigious title of “Magic Circle Close-up Magician of the Year” three times, Michael has spent the better part of three decades honing his skills to become one of finest magicians that Great Britain has ever produced.

This DVD collection showcases his world-class magic in front of a live audience and features some of the most stunning magic ever filmed. As you watch it, you will experience for yourself why Michael’s stunning presentations are regarded by audiences and fellow professionals alike as some of the very best in the world today.

This Alakazam production is the first in an ongoing series… Lookout for further releases from “The Michael Vincent Collection.”

The Intuition Speller.
Inspired by an original effect of Harry Lorayne’s, Michael introduces you to a machiavellian piece of misdirection which creates an impossible spelling effect.

My Card, Your Card, Everybody’s Card.
The history for this effect can be traced back to Robert Houdin’s “Secrets of Conjuring and Magic”. Michael’s handling and presentation brings this ancient effect right up to date for the 21st Century. This routine features Michael’s handling for the obscure Second-From-The-Top-Change.

The Amazing Discovery.
This popular effect has made rounds in the last few years. Michael share’s his professional presentation. His handling and performance tips elevate The Multiple Selection routine to another level. His performance in the live show was a tour de force!

Plus bonus performances of: The Rhapsody in Silver, The Cups and Balls and The Knotted Silks.

Brainwave “My Way.”
This routine is one of the highlights of this DVD. International card expert Darwin Ortiz had this to say about Michael’s Brainwave: “Sleight of Hand techniques have reached such a point, you’ll never need to present the classic Brainwave with a gimmick deck ever again. This routine is just about perfect”.

Michael has taken Dai Vernon’s “Brainwave” effect and turned it on its head into masterpiece of construction and design. With this routine, you will come to appreciate “The Power of Assumptions” and “Audience Attention Control”. Also featured is an under used principle in magic, creating an effect in the mind of the audiences before any technique has taken place. This principle alone is worth the price of this DVD presentation for it opens up untold possibilities.

Pandora’s Paradox.
There is a world of difference between a card trick and card magic. This routine pushes the boundaries in terms of what is possible with a deck of cards. With credit to Bruno Hennig, Tommy Wonder and Roberto Giobbi, Michael has taken the classic “Signed Card in Box” and amplified the effect with an elegant presentation and technical mastery, to produce an experience equal to any theatrical presentation. We think this routine will become a huge favourite.

Match Made in Heaven.
Dai Vernon’s “Matching The Cards” meets The Aronson Stack.

Prologue to Triumph.
If you enjoyed Dai Vernon’s original “Triumph”, then you will love Michael’s build up to this classic effect. This routine features some interesting applications for Larry Jennings’s Larreverse and Edward Marlo’s “One Hand Bottom Deal”.

Plus bonus performance only of: The Coins Across / Chinese Connection and a discussion on the inspirations for the routine including learning references. Also a bonus PDF teaching the Wild Card routine featuring Michael’s breathtaking colour change.

A discussion of how to improve your magic, raise your own standards and how to master and improve the basic techniques in sleight-of-hand. This is the beginning chapter in an on-going course in sleight of hand mastery with Michael Vincent. We begin here with the basic foundations of card handling.

Michael will share with you his practice drills for:

Plus bonus material: Michael’s background and advice on mentoring.

Praise for the Magic of Michael Vincent:

“Michael is a soft-spoken individual but his performances’ amplify this facet of his personality to the extent that one is irresistibly led to conclude that here is a magical talent of noteworthy merit. Underlying this congenial demeanour is a savoir-faire that bespeaks sophistication beyond his years.” James Patton. Editor of The Magicana Column, for Genii Magazine. Volume 53, No3 September 1989

“Michael Vincent has a performing style that is flawless. In the 30 years I’ve been performing Sleight of Hand, it is rare that I’ve seen someone who is able to combine flawless execution, steely assurance and a delightful presentational ability in the unique way that he has. Like Leipzig, he is deadly sure of his success. Like Vernon, he thinks constantly about magic and like Mike Skinner, everyone who watches him ends up liking him.” Steven Youell 2009

“It is always a joy to watch you fluidly play with the pasteboards.” Jon Racherbaumer 2009