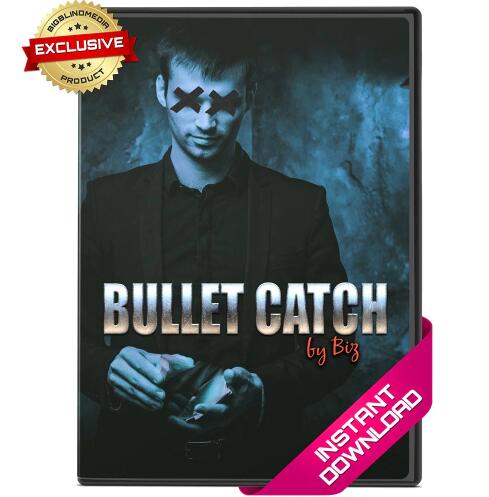 The Bullet Catch by Biz and Bogdan

A BBM EXCLUSIVE VIDEO DOWNLOAD – Imagine this – you have a card selected and lost in the deck and then you immediately hand the pack to your spectator to hold. Then, whilst it’s in THEIR hands, you slide a card into the deck and it’s right next to their selection.

Romanian card ninja Biz & his collaborator Bogdan have created a truly ingenious method that allows the magic to happen in the spectator’s hands. How can anything untoward be going on if the spectator is holding the deck themselves?!?! This devious ploy will open up untold possibilities for you, allowing for incredible routines and immediate improvements to material you already perform.

Learn the special technique that Biz & Bogdan have perfected and then master the routine they love to perform with it – The Bullet Catch!

THE BULLET CATCH ROUTINE – You offer to show your audience the fabled ‘Bullet Catch’ trick… but with playing cards because of, well, you know, health and safety. A card is chosen as the ‘bullet’ and then your spectator picks a card and it’s lost in the deck.

The shuffled deck is then handed to the spectator. THEY hold the deck while you fire the bullet card into the centre of the pack. It is left fully in view, protruding from the middle of the deck.

The spectator is then invited to spread the cards that they still hold, and the bullet is revealed to be right next to their selection.

Remember:
No crimps
No marks
No bends
Totally impromptu
Use any deck

Once you have learnt the secret technique in The Bullet Catch, you’ll be able to apply it to ALL the card magic you do.

I MISS CHARLOTTE by Ali Foroutan