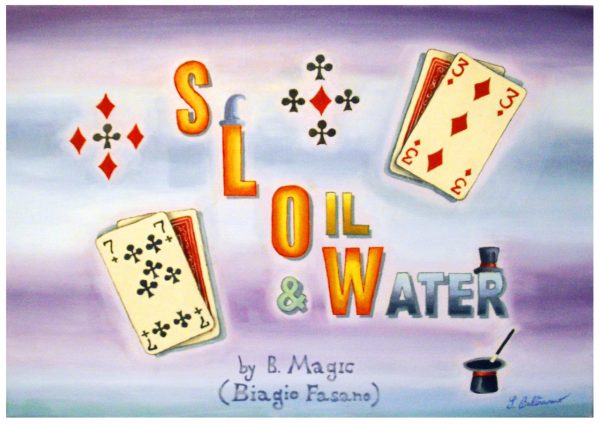 A powerful, but simple to perform, “Oil and Water” Card Magic Routine,…

A powerful, but simple to perform, “Oil and Water” Card Magic Routine, in which all your moves will appear genuine because all will be shown very slowly and clear!

This is a new very special “Oil and Water” routine in which the magic happens in misterious way, because each movement of the magician is really very slowly and clear.

All begins with 4 mixed pairs of cards, one red and one black-suited, being shown and put on the table. Then the magician simply takes apart the first four cards on top, and all their suits become magically of the same color!
Now the magician will alternate on the table, not only red and blacks suits, but also face up and face down cards.
When he squares the deck, just few seconds later, again the cards misteriously have separated theiselves between red and black suits!

1) A new powerful Oil & Water routine, really inexplicable for the most.
2) Simple to perform: it just requires knoweledge of the Elmsley Count.
3) Only few normal cards required.
4) No gimmick!
5) Easy to learn.

Be the first to review “SLOW Oil & Water by B. Magic (Biagio Fasano)” Cancel reply