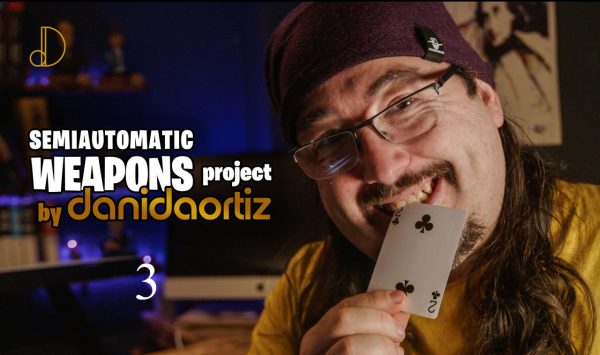 From pure chaos comes a DOUBLE miracle. Cards are shuffled, randomly thought of, and 3 numbers are randomly picked. BOTH chosen cards are EXACTLY at their numbers.

Semi-Automatic Weapons Chapter 3: Double Any Card At Any Number

In the third lesson of The Semi-Automatic Weapons project, Dani shares with you an impossible double card at number that will blow your audience away. In this phenomenal trick, two spectators are each invited to write down secret numbers. The deck is thoroughly shuffled. The magician shows a number of cards to the first spectator, who is asked to remember the card at the secret number they wrote down. The deck is shuffled and cut again. The second spectator is asked to do the same thing. The deck is shuffled and cut again. The numbers are then revealed, and impossibly the cards the spectators selected are exactly at the position of the secret numbers they wrote down. Dani is joined in this lesson by some of his closest friends and students for a session on the incredible principles at play in this Semi-Automatic Miracle. This lesson, around forty minutes in length, includes an amazing trick as well as variations on that effect to give the student a true understanding of an incredible principle. Key takeaways for the student include:

Multiple Card Positions
Dani will teach you how to cleverly place multiple cards into positions advantageous to the magician right underneath the spectator’s nose. Using clever mathematical principles inherent in the deck, along with creative routining, you will learn to position three cards in precise positions for impossible revelations.

Variations Upon Variations
In addition to the weapon this lesson focuses on, Dani takes you through its rich history. You learn the original principle developed by Kaplan. Then Dani introduces the methodology behind this principle as well as his variations that make it more deceptive than ever before. It’s a true lesson in bringing classic principles into effects with a modern sensibility.

Not Using The Whole Deck
Once you learn the fascinating principle, you will want to learn how to use it when your deck is short a couple of cards. Dani has you covered. So many semi-automatic principles require a complete deck, but Dani teaches you how to adapt a principle to using fewer cards and how to justify having only some of the deck in play. With Dani’s help, you will no longer be limited by a deck of cards that have had a couple of cards go missing.

Lesson Three of The Semi-Automatic Weapons Project continues this comprehensive course in Dani’s thoughts with an impossible piece of card magic your audience will never forget. In addition to Dani’s clever approach to Kaplan’s fascination contribution to card magic, you’ll learn the way Dani has adapted these ideas to his unique performance style. You are about to become privy to the secrets that make the magic of Dani DaOrtiz so disarmingly devastating. It’s time to go to school with Dani DaOrtiz in the third lesson of The Semi-Automatic Weapons Project.