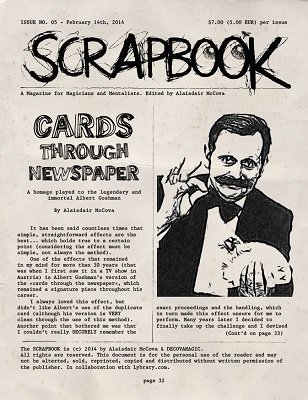 In this issue, I go into great detail for my version of…

In this issue, I go into great detail for my version of the routine “Cards Through Newspaper”, an effect which was popularized by the great Albert Goshman in his professional act.

CARDS THROUGH NEWSPAPER – I taught this version to Doc Eason years ago. Here is the complete description with all the details (for you, Doc!). Doc told me that he showed the routine to Eric Mead and Eric had some nice words for it, means, he liked it. Four cards (any four cards, signed or unsigned) penetrate a sheet of newspaper one at a time. This is a worker’s version, no duplicates, preparation or anything. You can perform this routine impromptu and that’s the real value.

As well, I streamlined the handling. At the end of the routine you will find a link to a videoclip of the routine, where everything is explained visually, without words.

PETALOGICAL ASSEMBLY – Based on John Guestaferro’s wondertful “petal count display”, I rearranged DARYL’s “Jolly Jumping Jokers” routine (also known as the “Psychological Assembly”) using John’s move. I always loved the routine, but getting into the necessary set-up caused me some headaches. With this handling, everything is solved and the trick couldn’t be more direct and easy.

TAMARIZ MEMO DECK DAY 3 – The continuation of my little series on memorizing the Tamariz stack.

ENTHYMEMATA – Here I tip the workings of my version (solution) to the Koran Gold Medaillon effect. The three digit number is engraved into the back of the medaillon. I don’t go into the details of construction (which probably will be in a future issue), but then you get an idea of what it is all about.