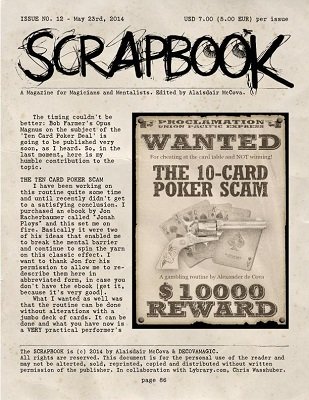 This issue deals with two routines. The first one is de Cova’s…

This issue deals with two routines. The first one is de Cova’s version of the famous ‘Ten Card Poker Deal’. This is a routine in four phases and makes use of a full deck, which is shuffled and cut. Each phase is build up and more challenging. All the time the spectator wins against you and he has no idea how. With all phases the spectator makes absolute free decisions and the climax is an overwhelming Royal Flush of Spades in his poker hand. Easy to do and entertaining.

The second routine is called ‘The Green Card’ (has nothing to do with Lennart) and it was one of the main routine in Alexander’s ‘Misteir’ lecture. It is a baffling and entertaining card routine, combining three different effects that lead into each other in a logical way. Cards transpose multiple times and for the finish, a signed selection ends up in a wallet. Everything is motivated and logical and the last phase comes totally unexpected. Alexander has given also his patter suggestions, which is important and makes the trick entertaining. Relatively easy to do, only basic sleights are used.