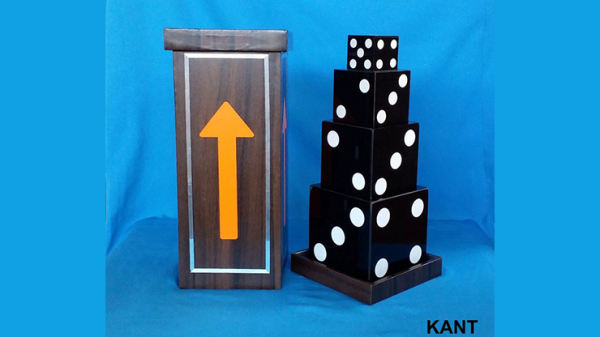 Amazing magic effect for all types of magic performances. This trick inspired…

Amazing magic effect for all types of magic performances.

This trick inspired from the 1940s impressive magic outcome.

The magician presents the square tube and 2 lids, show that it covers 4 black dices with white pips dices stacked on top of each other as form a pyramid. Logically, largest at the bottom and the one at the top is small.

He covers the Tube back so that it again conceals the dices and directs the arrows on all four sides of the tube shows the spectators where the top of the pyramid is. He that puts a lid on top and turned over the whole tube so the arrows are upside down. The amazing thing is that when he removes the Tube, The dices are still positioned the same way as before with the largest one at the bottom, the smallest on top!

This can be repeated as many times as the magician desires. How can that be? The audience will become more and more confused. It is not possible for the dice to change places in the tube. In addition to, the tube was shown to be empty at the beginning and several times during the trick.

But the magician still has the last climax. The pyramid is again covered with the tube and turned over,. As a last status, he transforms the dices which all are different colors! The bottom dice is green, the next is yellow, the third red and the smallest top dice is white