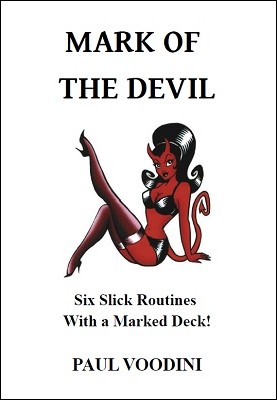 Mark of the Devil By Paul Voodini

6 Slick Routines with a Marked Deck!

This manuscript features six routines from Paul Voodini, all utilizing a marked deck. As well as fully explaining the routines, Paul also discusses many subtleties that allow the performer to use a marked deck with confidence and the ‘tricks of the trade’ that mean the spectators never suspect for a moment that there is anything ‘funny’ about the cards.

The routines included are:

The Keeper of Secrets. The performer is able to correctly divine a chosen card despite the spectator desperately trying to keep its identity a secret.

Thought Transfer. Performer and spectator work together as a team to demonstrate ESP or thought telepathy.

Dead Man’s Eyes. It is said that a dead man’s eyes record the last image they see. Could this theory be true?

Love Thy Neighbour. The mind-reader is correctly able to predict a playing card despite the fact that neither the mind-reader nor the spectator have seen it or can have any knowledge of it!

Secret of the Mayans. A Mayan artefact, tied in with the 2012 doomsday prediction, allows a spectator to successfully select a pre-ordained playing card. It’s a mystical miracle!

Forethought. The performer correctly predicts a cut to playing card before the cut is made!