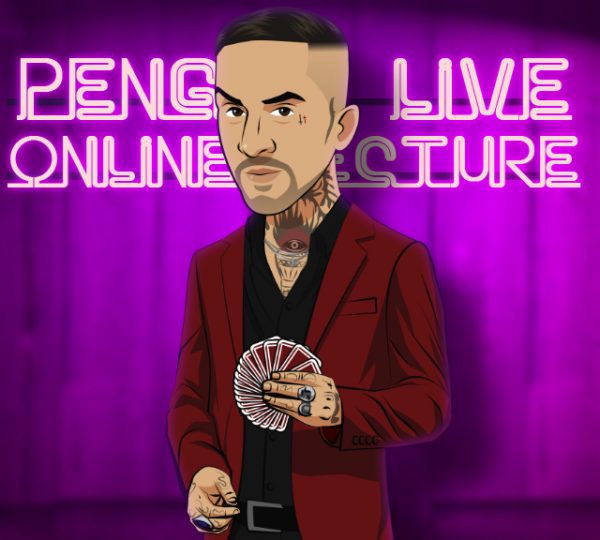 “Mark Calabrese is the real deal. Sure, he’s been putting out clever…

“Mark Calabrese is the real deal. Sure, he’s been putting out clever and original commercial releases for years. Yeah, he has killer sleight-of-hand chops, particularly when it comes to card table artifice (you have to see him do false deals to truly appreciate what you won’t see). But what really impresses me about Mark is that he is a real-world working entertainer: polished and professional, charming and funny, I love watching him perform for the public. Put it all together and you see why I mean it when I say: Mark Calabrese is the real deal.” -Jamy Ian Swiss

“Mark is every bit as clever and skilled as he is tattooed. An Illustrated Man of Mystery. Whose work and knowledge is worth your attention.” -Jon Armstrong

“Mark Calabrese is one of my favorite creators. His ideas are fully thought out, practical, and completely ingenious. If you want magic that absolutely destroys people, Mark is your guy. I purchase very little magic these days, but when Mark releases something, I get it immediately. I’m honestly not sure why he continues to publish. I would keep ideas like these to myself. If you’re looking for magic that is guaranteed to rock peoples’ world, Calabrese is your guy. He is truly one of the best. If you like high-impact material that is guaranteed to deliver astonishment, look no further. If I had a nickel for every time Mark fooled me, I would pay off my house. Then I would hire Mark to keep breaking my brain.” -Ben Seidman

“Mark is somebody who I want to keep secret from the world but at the same time tell everybody about. I’m blessed to be somebody who he’s willing to share his secrets and ideas with and lucky are those who get the same privilege. I’m his biggest fan.”  – Daniel Madison

“Mark is an ‘in-your-face’ force of nature, thoroughly unafraid to challenge magic’s conventional wisdom. His performances constantly remind me that personality is at the heart of entertainment.” – Atlas Brookings

“I always enjoy seeing Mark’s work. He is someone who always pulls out a gem or two when you least expect it.”  – Alan Rorrison

“Every time I see Mark he has something new to blow me away. A very creative thinker with the hands to match.” – Doug McKenzie

“Mark’s show and lecture was the best I’ve seen this year. You are going to hate how good he his.”-Nick Locapo

“Mark is sharing the real work. This isn’t just a masterclass in card handling, this is how a top pro puts together one of the best close up sets in New York. When I grow up I want to be Mark.” -Erik Tait

“Mark’s lecture is one that will live in my memory for a long time. It’s incredibly entertaining and the magic is stuff that you will do!” -Nick Popa

“Forget what you thought you knew about performing magic. It’s that good. Mark’s show is not only fooling, his work will give you an inside look at what a world class worker performs regularly at one of the most prestigious magic venues in NYC. He leaves no stone unturned in the lecture, sharing each effect in meticulous detail, with insights and tips that will make your magic stronger and more engaging, regardless of what kind of magic you perform. -Travis Askew

“Mark is as skillful with a deck of cards as he is funny. While watching him work there was not a moment where I wasn’t either laughing hysterically, or completely fooled. Mark is truly a genius.” -David Newell

The Speakeasy Act- Mark’s 20 minute Act that he performs 20 times a week to one of New York City’s hippest and toughest crowds.
You get every nuance and expert tip for this killer act!

ELYOUSEEKAY with Passcode- This is Mark’s pet routine.
The spectator chooses any four random cards from a spread and those cards are the spectator’s passcode to their phone!

Three Card Monte with Kicker- Three card monte played in real time with an ending that impossible to beat! The magician plays three card monte and after winning over and over he offers the spectator to play a reverse version. All they have to do is stay away from the money card. They fail because the magician is cheating as all the cards become the money card!

Think a Card- Mark’s work on the Fan force with tips on how to raise your percentage on nailing this killer trick.

52/1 Card Routine- Mark’s closer. The magician proposes a bet to play with their spectator. The magician places a single folded card on the table. If They name the card the spectator loses the bet. An impossible selection with a kicker ending!

Performing professionally for 15 years, Mark Calabrese has made a name for himself in the world of close-up magic. Armed with cunning sleight-of-hand and a charming personality, Mark dazzles his audiences with his digital dexterity. He uses these tools to deceive and entertain his audiences while keeping them laughing out of their seats.

Ordinary, everyday items become objects of fancy as Mark delicately handles them with feats of prestidigitation. Coins multiply, cards fly, and audiences cheer. Mark’s brand of magic has been honed over the past few years all over the country.

Mark forms a special bond with his audiences, creating intimate miracles, often taking place in your hands! Mark is also an established Street performer in New York City’s South Street Seaport with many acts in his repertoire. Mark has been lucky enough to perform for stars suchs as Mike Epps (Next Friday, The Hangover), Rosie O’Donnell, Rob Schneider and Gilbert Gottfried, just to name a few.

Corporate clients include Meryl Lynch, MTV, and Morgan Chase Bank. In 2012, Mark was commissioned to consult for Las Vegas magician Criss Angel for television and stage magic. Mark has been featured on Television shows on MTV, FOX, The SYFY Channel and on CW as a contestant on the hit television show Penn and Teller Fool Us.

Mark has his own one man comedy magic show at the Levity Live Comedy Club that he has performed over 15 times to sold-out crowds in the New Jersey/New York area.

Mark is also an established magic creator and consultant. His best-selling work “DVS” and “The Seer” has sold thousands of copies worldwide.