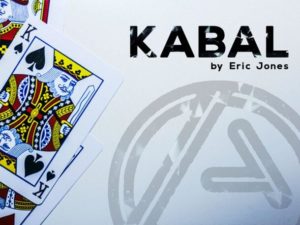 Kabal is a full-length performance piece that can be done surrounded without any knuckle busting moves. After almost a decade of construction, Eric Jones is finally releasing this close-up gem, a perfect fusion of Collectors and Card to Impossible Location.

In the world of Kabal, the magician does not possess any power, but the cards themselves do. The four kings are being placed into an empty card box by the spectators. Three selections are made and lost back into the Deck fairly. The three selections then vanish from the pack and reappear in between the four kings that have been in the box since the very beginning. To the spectators, the magician has been hands off the entire time, the cards are operating by themselves.

In this 30 minutes detailed instruction, Eric shares every aspect of the routine, all the sleights, and psychology that make Kabal extremely straightforward and powerful.

The Top Shot
The Swirl Production
The Bottom Feeder
Eric’s streamlined handling of Bottom Feeder
If you want to create an immersive close-up experience in any intimate settings, Kabal is the perfect routine for you.

Be the first to review “Kabal by Eric Jones” Cancel reply