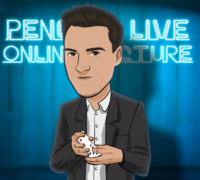 “What does Henri do? What doesn’t he do? He is my go to source for everything. As far as magic is concerned his knowledge is encyclopedic and his skills are extraordinary.” -Fay Presto

“I’m convinced that Henri has been born into the wrong century. In an era where magicians typically focus on instant gratification and poorly thought out ideas, Henri bucks that trend and takes us back to a time where creators actually thought about their creations. His material is powerful, hard hitting and multilayered. More importantly watching him learn and teach really makes you think about your magic and how to actually be a real magician.
If you really want to consider yourself a magician it’s a vital importance that you study anything Henri has to say” -Craig Petty

“Henri is one of the busiest magicians in the UK.
His finesse with cards is up there with the best and his knowledge and passion for magic is second to none. Henri’s kindness and generosity with that knowledge is rare in our industry, I have lost count on how many occasions he has helped me on all aspects of performance from the technical side to the method. Henri is a real worker and a true gentleman of our art.” -Laura London

Flash Production- A brilliant way to produce a deck of cards, a rope, or any other object to command attention at the beginning of your show.

Personal Card Routine- What starts with a named card production becomes cards transforming, vanishing, appearing, and packs tons of visual high impact magic into just a few minutes. Henri also delves into the theory and technique to execute a perfect classic force, how to hide your culling and other great hints and tips about card sleight of hand.

Omni Deck- This is the routine that has taken Henri around the world, and allowed him to perform for presidents and royalty. He details the real work on how to incorporate this classic prop for maximum impact.

52!- Combines the triumph routine with a story deck to create a fantastic demonstration of mind skill.

Butter Knife Card Stab- A visual mid air card stab using a butter knife that is impressive and entertaining. This is great for walk around, but also can fill a giant stage. Henri also teaches a variation that transforms a chopstick into a card sword.

Ricky’s Tray- A fun offbeat card effect where the card selects itself on a waiter’s tray.

Phantom Book Test- This is an unforgettable book test with 6 sheet music books and a piano. Even if you are not musically inclined, this routine will help inspire you to create both chaos and fun in one memorable routine.

Henri has earned himself the nickname of “The Swiss-Army Human”; through his vast range of experiences in and out of the world of magic. His range of knowledge means that he is on speed dial for some of the biggest names in the industry as the only person to call you when you need help.

His career has seen him work on countless TV and theatre projects as well as performing and working with over a dozen international Royal Families and Dignitaries. Henri started the first Social media magic forum—which grew to be the biggest of its kind— he’s also on the Council of the world famous Magic Circle, where he has been instrumental in some of their biggest advances as a society in the past 5 years.