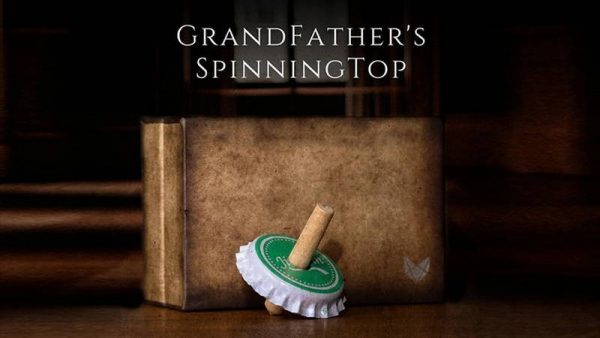 A levitation effect for the professional and hobbyist alike. Insane visuals, a…

A levitation effect for the professional and hobbyist alike. Insane visuals, a powerful storyline and a killer surprise ending that ties it all together in a magnificently poetic way.

As many of you know, levitations are one of the most powerful things you can show an audience. In fact, they’re so powerful that most professional magicians use them as their closing effect because it’s just too strong to follow with anything else.

With Grandfather’s Top you’ll tug at the heartstrings of your audience while at the same time showing them something they’ve never seen before. The main problem with close up levitations is the lack of a climactic ending. Once the object has levitated for a bit, there isn’t much left to do except hand it out for examination and then close the routine. We’ve always felt there could (and should) be something more…Something to add a big ol’ exclamation point to the end of the routine, so it doesn’t fall flat.

Grandfather’s Top starts with a wooden bottle cap top in a small cardboard box. As the story progresses your spectators watch as the top starts taking on a life of its own, floating from hand to hand, then all around your body. At the end of the performance the wooden top vanishes in mid-air, only to be found back in the box that it came from. This is the perfect ending we’ve been searching for!

IF YOU’RE LOOKING FOR A REAL SHOWSTOPPER FOR YOUR CLOSE UP SETS THEN GRANDFATHER’S TOP MAY BE JUST THE TRICK FOR YOU!

What You Get: Custom made spinning top gimmick and switching box device with everything you need to float it like a pro plus over an hour of detailed video instructions from the inventor Adam Wilber.

Skill Level Required: This project is taught in extreme detail so you can start floating like a pro regardless of your skill level.

NOTE From Adam/Vulpoine Creations: – To do the wave vanish shown in the trailer the user will need an item they probably already own. We teach an alternative vanish that can be done without any other items but we want to make sure it’s clear the wave vanish will require an additional gimmick not supplied in the kit.

Show to Go by Adam Wilber