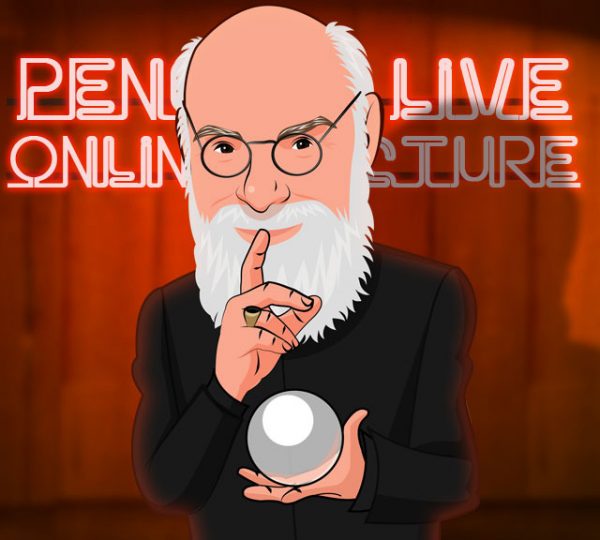 One of the most influential magicians of the twentieth century comes BACK here to Penguin LIVE!

“Eugene is not just one of my favorite magicians in the world to watch, he’s also one of the greatest teachers of magic alive. I’m sure he’ll perform and explain fantastic tricks that’ll fool you and your audiences, but I’m certain he’ll also impart important and valuable insights into audience management. Plus, he’ll be funny and charming. Do everyone in the world a giant favor and watch Eugene Burger’s Penguin LIVE Lecture.” – Mac King

“Dear magicians: Eugene Burger gets it. He knows how to explain it. And he’s willing to share.” – Max Maven

“Eugene is the Dean of the Magic & Mystery School, and has mentored many of the most successful artists of our time. Now you can learn why he has earned the title of “THE MASTER”!” – Jeff McBride

“For decades Eugene Burger has been recognized by magicians and the public as one of the finest and most engaging magicians alive.” – Stephen Minch, Genii Magazine

Spirit Theatre, How to Haunt a House, and More
Eugene Burger is a world-leading authority on performing magic that involves the spirits. His book Spirit Theatre (1986) is a landmark work that re-defined this kind of magic for modern audiences.

In this lecture, Eugene will be joined by Lawrence Hass, who has created several spirit theatre and séance shows with Eugene. They will talk in great detail about performing this special kind of magic and teach the following spirit or Halloween-related routines.

Acrobatic Matchbox – A fun close-up opener that invokes the spirits.

The Haunted Bell – Lawrence performs this creepy effect using Eugene’s original script. Based on an idea by Max Maven.

The Lake Witch Project – Eugene and Lawrence have both performed this powerful effect by Steve Bryant. It scares the hell out of an audience!

The Ballad of the Harp Weaver – Eugene has performed this classic, disturbing poem by Edna St. Vincent Millay the entire length of his career in spirit theatre. Eugene will also share a magical ending for the poem created by Jeff McBride.

The Dark Room – Eugene and Lawrence will discuss one of the deepest secrets of spirit theatre: how to create a powerful Dark Séance to close the show.

Tools of the Trade: Birds, Balls, Ectoplasm, and Show Ghosts – Eugene shares some of the backstage tools he created and uses for the Dark Room.

He’s amazed and delighted audiences from Las Vegas to Tokyo. As Stage Bill magazine proclaimed, Eugene Burger is “universally recognized as perhaps the finest close-up magician in the world.”

“Close-up magic” is just that: magic performed right under your nose, where everyone becomes part of the show. And with Eugene Burger, it is an unforgettable experience, for as the Chicago Reader noted in an unprecedented eleven-page cover story about him, “Burger adds something extra.” His warmth and humor are captivating and his magic is simply amazing.

By definition, magicians are pretty special people, but Eugene Burger is considered exceptional even by other magicians. He has written fifteen best-selling books for the trade, starred in eight instructional videos, lectured extensively to magicians’ groups in over a dozen countries, and his writings have been translated into several languages.

His deep understanding of the psychology and philosophy behind the magic have won him international accolades, cover stories in conjuring magazines, and four awards from the famed Magic Castle in Hollywood.

But as much as he loves discussing magic with fellow performers, Eugene’s true passion is bringing mystery and enchantment to the public, and at this he is unparalleled. His special presence has led to numerous television appearances in Great Britain, Canada, Belgium, Finland and Japan, and on such highly acclaimed shows as The Art of Magic on PBS and Mysteries of Magic on The Learning Channel. He’s been profiled twice on CNN.

During the past several years, Eugene has been a featured speaker for top executives of such major companies as Coca-Cola, Williams-Sonoma, Unisys and Pottery Barn, as well as top business schools including Wharton, and the graduate schools of business at the Universities of Chicago and Maryland. His talk, “How Magicians Think,” applies his special understanding of deception and perception to the corporate world.

When the leading international trade journal Magic magazine compiled its list of the one hundred most influential magicians of the twentieth century, Eugene Burger was included for his ability to “arouse feelings of astonishment, as well as a host of other indescribable sensations.”

Find out why this engaging entertainer is in constant demand for private parties, corporate functions and special events. Discover for yourself what the Chicago Tribune hailed as the “delightful excitement” that is uniquely Eugene Burger.