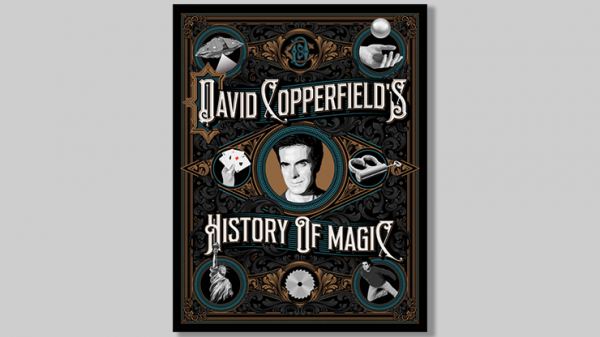 A captivating and enlightening exploration of the history of magic, illusion and…

A captivating and enlightening exploration of the history of magic, illusion and conjuring.

Despite being one of most influential, if not THE most influential, magicians to ever live, David Copperfield has never lost sight of the fact that magic is an art that stands on the shoulders of giants. His passion for the history of magic and ensuring each new generation recognizes the greats who came before us makes him the perfect captain for this journey through the fascinating world of deception.

With help from fellow magicians Richard Wiseman and David Britland, Copperfield chronicles 28 different groundbreaking magicians that helped transform magic from simple feats of trickery into a beloved and respected form of entertainment. From Reginald Scot introducing the world to conjuring with The Discoverie of Witchcraft to Dai Vernon (a.k.a “The Man Who Fooled Houdini”) revolutionizing the possibilities of close-up magic to the woman who proved magic is not just a man’s world by levitating and catching bullets between her teeth, David Copperfield’s “History of Magic” is an exciting look back at the remarkable evolution of magic.

Like many magicians, each of these conjurers shared similar stories of using magic to escape the limitations of their culture or socioeconomic status. By learning how to leverage the inner workings of the human mind and embracing the latest technological and scientific discoveries, these magicians were able to drive social change and transform magic from a secret underground art into a relevant part of mainstream pop culture.

These remarkable tales are complemented by more than 100 never-before-seen photographs from David Copperfield’s illustrious Museum of Magic in Las Vegas, including a 16th century treatise on sleight of hand moves, Houdini’s straightjackets, handcuffs and water torture chamber, Alexander’s high-tech turban that enabled him to read minds as “The Man who Knows”, Dante’s famous sawing-in-half apparatus and even some coins that were believed to have once been held by America’s 16th President Abraham Lincoln.

David Copperfield’s “History of Magic” is a gorgeous hardback book with full-color photos that will anchor any library or collection. It is sure to inspire you and leave you filled with the same passion for magic that has driven him to become one of the most successful entertainers in the world.