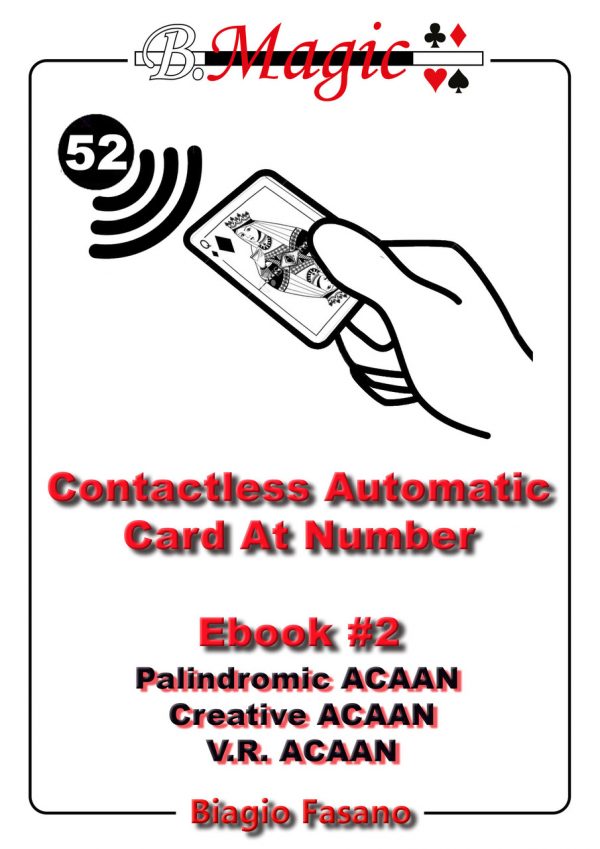 It’s a new series of hands-off self-working card magic effects, that will all happen in your viewer’s hands. No particular skill is required, just the ability to instruct and pay attention to what the viewer is doing.

In this second eBook you will find a color PDF that will allow you to perform amazing automatic “Any Card At Any Number” effects.

These are the simple rules that all my effects obey in this project:

1. The deck in use could be stacked or gimmicked, but anyway it must be possible to show it to the audience (and in case, to be quickly examined by a spectator).
2. Once the cards have been (falsely) shuffled, the deck is given to a spectator and the performer will no longer touch it until the effect ends.
3. The performer will simply provide all the instructions that the spectator will follow and the effect will happen in his own hands.
4. Viewers will truly believe they have complete freedom in choosing both the number and the card.

All effects included here will use a new mathematical stacked deck that I call V.R. STACK PRO, which is also described in detail in this ebook: (I and Felipe Suau first used this unknown pre-ordered deck in an amazing mentalist effect we called S.E.MP.E.R.)

Included in volume 2 there are 3 effects.

A shuffled deck is given to a spectator who can cut it up as he likes; he will then deal a small group of face-down cards, one on top of the other, leaving aside the rest of the deck. He will then turn face up and one at a time the cards of that pile, stacking them in turn and will be free to stop at any point, “creating” a card at random, consisting of the value of one card and the suit of the next. The cards left in that pile will determine the number. Incredibly, counting the cards in the deck up to that number, the spectator will find just the chosen card. But the surprise is not over yet: by reversing the position of the two “creator” cards, the magician will show how the one that before indicated the value can now indicate the suit and, vice versa, indicating a new card. Moreover, by counting the cards he had already stacked face down on the table, a new number will be determined. Well, turning the deck face up and counting up to this other number, the second card chosen will be found.

A deck of cards is shuffled and had cut at will by the spectator. The sum of the values of three cards will determine a random NUMBER N and he may also choose to “generate” a BLACK or RED CARD, determined at random by the VALUE and SUIT of the first pair of cards he turns over in the deck. Continuing to count the cards until he reaches the indicated NUMBER, to the amazement of all present he will find the chosen card. A second optional phase, also Palindromic as for the previous effect, is also illustrated.

A deck of cards is shown and shuffled by the conjurer, then handed to a spectator who cuts the deck at will. He then begins to turn over the cards, one by one, stacking them on the table and stopping when he wishes. Of that card, unique in the deck, only the VALUE will be taken into consideration, turning then as many cards in a new pile to determine thus also the SUIT of this new CARD generated by chance. But, in turn, the value of the second card will also determine how many cards to deal stacking a third pile, whose top card will help determine a random NUMBER. Once the destiny has decided on a NUMBER and a CARD, the spectator will resume counting the cards from the rest of the deck and, when he reaches the card in the position corresponding to that Number, he will incredibly turn over the chosen CARD.

– “… Works like this one by Biagio Fasano are important because, in addition to presenting special effects, he devotes a lot of care to the scenic and surprise effects they can have on the audience, especially if everything magical in the performance happens in their hands.
In an exhibition, the more the spectator can be a participant and “protagonist” the more the final surprise and fun will be memorable for him. Fasano presents 3 new original A.C.A.A.N. (Any Card at Any Number) effects that require no manipulation. Beware: this does not mean that they are simple effects with which to face the audience, but that their conception is so ingenious and effective that everything is based on the effect and not on hand acrobatics.

We start with the description of a pre-ordered deck (VR STack PRO – the name will be clear to you during the explanation of how to make it). …

In Palindromic A.C.A.A.N. … we have a subtlety because for the viewer it immediately establishes the [apparent] randomness of the whole … On this remarkable effect is added a next step that goes to create the famous “twist” (and from these details you can understand how Fasano has carefully studied every detail that can appeal to our audience) ….

Creative A.C.A.A.N.: … this effect is also designed so that the volunteer and the audience can see that the magician is not manipulating the deck of cards, which makes the whole thing even more amazing and astonishing …

V.R. A.C.A.A.N.: …if the performer is suspected of manipulating the cards, the volunteer knows that it is he who will decide the order of the cards… Having decided on a NUMBER and a CARD, the spectator… when he reaches the card in the position corresponding to that Number, will incredibly turn over the chosen CARD!

From the description alone we can understand the enormous potential of these three effects because we must remember that to perform a magic trick is not to demonstrate one’s own abilities, but to entertain and amaze the audience. They will not have to think about where the trick is, but they will be surprised and displaced and will remember that moment with pleasure.” – Luca Ramacciotti