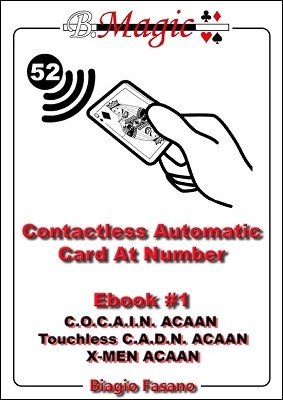 The first part of a new card project including 3 new A.C.A.A.N….

The first part of a new card project including 3 new A.C.A.A.N. effects requiring no sleight of hands: C.O.C.A.I.N. ACAAN, Touchless C.A.D.N. ACAAN and X-MEN ACAAN. A new series of self-working card magic effects that will happen in your viewer’s hands. No particular skill is required, just the ability to instruct and pay attention to what the viewer is doing…

In this first eBook you will find a PDF that will allow you to perform amazing simple and self-working “Any Card At Any Number” Effects.

These are the simple rules that all my effects obey in this project:

C.O.C.A.I.N. ACAAN:
(inspired by a Richard Osterlind’s idea and published with his kind permission).
A shuffled deck is introduced and given to a spectator who can cut it as he likes and look at the card where he cut the last time . Then he will lose that card in the deck and freely choose a number. He will place on the table that number of cards, and amazingly his card will be found at that exact position.

Touchless C.A.D.N. ACAAN:
The spectator will throw 3 regular dice to choose a random number, and after he will have selected a card, shuffled and cut the deck, he will find his card at that exact position scored by the dice.

X-MEN ACAAN:
A shuffled deck is given to a viewer, who will cut the deck in three, count the cards in the last pile and look at the last card he cut, which will be lost in the deck. Then, the performer will say that he has just made appear a big X on the back of one and one card only. Searching for it, the spectator will find that card but it will not be the chosen one. Anyway, starting from there and counting exactly his number of cards, it will be found the right card he selected!

Inside by Mat Parrott