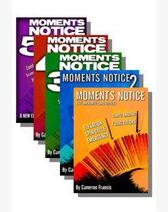 Cameron Francis presents five devastating, completely impromptu card effects that you WILL add to your repertoire right away! This is commercial, easy card magic at its best. No set-ups and no extra props. All you need is a deck, two hands, an interested spectator and you are set to amaze!

Here’s what you’ll find beyond the cover:

Elevation:Four phases of sandwich / elevator / twisting / transpo madness that will make you look like a sleight of hand God. But it’s all oh, so easy to do!

Emergency !:A super convincing in the hands Triumph that’s easy to do!

Simply Amazing:A fantastic Ace Assembly for those who do not like Ace Assemblies!

Flying Colors:A transposition of red cards and black cards with a knockout second phase in which everything happens in the spectator’s hands!

“Moment’s Notice contained a superb collection of impromptu card effects In this second volume, Cameron has done it again … in fact, this second volume might even be better than the first, if that is at all possible.!” –Peter Duffie

“This is the kind of material I like, not the difficult to do and with the EFFECT in mind!”– Aldo Colombini

“Cameron’s material from the Moment’s Notice series makes me want to go for a swim in Antarctica. It’s that freakin hot! “– Donny Orbit

“I did not want Moment’s Notice 1 to end. This one picks up perfectly where the last left of. Filled with brilliantly commercial impromptu effect ready to slot into my cache of everyday tricks! Solid stuff Cameron!”– Jamie Daws

“Having great impromptu material is what separates the men from the boys. Moment’s Notice 2 will get you there quicker”– Ryan Schlutz

Due to the popularity of the first “Moment’s Notice”, Cameron Francis is back with six more amazing, commercial, completely impromptu card miracles. And when we say impromptu, we mean impromptu! No extra cards, no set ups, no extra props! All you need is a deck and you are ready to go!

Hof the Case: Hofzinser meets The Collectors in one amazing card effect!

P ‘Wave: An easy to do mental shocker!

Six more impromptu miracles from Cameron Francis that are guaranteed to amaze. All impromptu. Use any deck. No set ups. No kidding!

Sympathy– The four Queens twist and collect in the cleanest manner possible This routine was a huge hit on Cameron’s recent lecture tour.!

Uppers – An elevator effect with a stunning finale!

“Cameron has done it again! His Moment’s Notice series just goes from strength to strength. All six routines in this latest (fourth) instalment are carefully structured and each one packs a punch.”– Peter Duffie
“With all of the material in the Moment’s Notice series I can launch a full on magic assault that is guaranteed to obliterate the senses. Thanks for keeping me prepared to maim at a moment’s notice.”– Donnry Orbit
Six more totally amazing, totally impromptu, easy to do card effects from the mind of Cameron Francis!

Sly Cheese-. A strange marriage of Peter Duffie’s “Sly Aces” and Luke Dancy’s “Royale With Cheese” Visually amazing and very easy to do!

Back Splash– A novel cards to card case effect.

Euphoria– A self working, double whammy prediction effect where the spectator does all the work.

Flush The Transpo– A transpo between Aces and Tens with a kicker ending.

“Fans of Cameron Francis’s work will not be at all disappointed, nor will anyone else for that matter!”– Chris Piercy

“As usual, a great collection of impromptu and pretty easy card routines that you WILL use.“- Raphael Czaja

Six more totally impromptu, totally easy, off-beat card effects!
Zombieland– Wild Card meets Zombies Yummy!!
Scammed Across– A super easy but completely amazing card across effect.
Hof-Wich– A practically self-working sandwich transpo based on the Hofsinzer Ace Problem.
Instinct– Two cards are selected One appears between the two black Kings The Kings are placed on the table and the selection is cut into the..
middle of the deck where it finds … the two Jacks! The second selection is where the Jacks were.
The Leader– A half-deck Triumph with a killer ending.
Collected Collectors– The Collectors plot with a huge twist.
20 page, photo illustrated PDF.