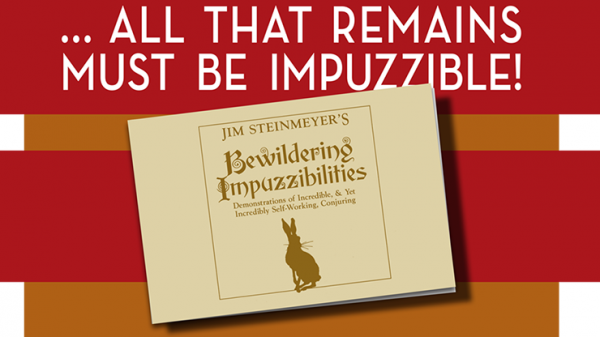 Our unassuming Impuzzibilities booklets have earned their devoted fans around the world….

Our unassuming Impuzzibilities booklets have earned their devoted fans around the world. Each volume offers amazing tricks that delight the performer and then amaze the audience – fascinating effects, mysterious systems and rich presentations. When virtual magic became a necessity, these little manuals offered the battle plans for magicians, as vital in a virtual world as the Zoom app. Then, these tricks worked their way into their permanent repertoires. Bewildering Impuzzibilities, the 10th book in the series, is brand new for 2021. (It’s the cream-colored one with the bunny.) This new collection of eleven tricks contains some that work perfectly in virtual situations and some made for live situations.

Ovations is a hands-off prediction using four printed card. You won’t believe that this sort of prediction is even possible. Do it for one person or one thousand people at the same time, virtually or in reality.

Traveling Companions is a baffling revelation (but it can’t be a force, right?) of four cards, based on absolutely free selections.

Fastest, Neatest is a brand new principle based on an old friend, free choices decided upon by one spectator.

Will I Be Lucky? is a surprising bit of fortune telling with a packet of cards; it starts with a funny premise and ends with a whack on the side of the head… And then, seven more bewildering effects with nothing more than playing cards or pieces of cardboard.

Like all the other books in the series, the tricks are clearly presented and illustrated with helpful charts; the secrets do all the work, and the disproportionate level of amazement makes your job a pleasure. They’re the books that will entertain you as much as the audience. You’ll find Bewildering Impuzzibilities along with other titles in the series. (Ask the fans who have been using these tricks.)