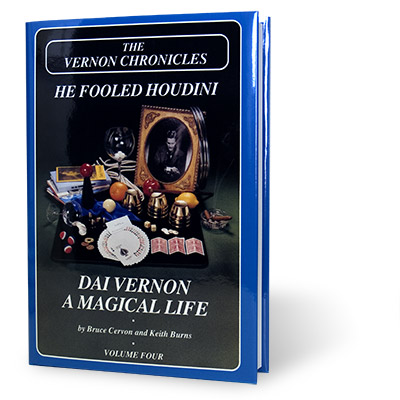 In 1992, the beloved magic book series chronicling some of Dai Vernon’s…

In 1992, the beloved magic book series chronicling some of Dai Vernon’s most cherished works concluded with “Vernon Chronicles Vol. 4: He Fooled Houdini, Dai Vernon a Magical Life.” For years, this was easily one of the hardest “Vernon Chronicles” to find. But now, it’s been remastered as an incredible eBook!

Unlike the previous books, which focused mostly on tricks, this book instead contains a variety of fascinating anecdotes about Dai’s life. Since there are only a few tricks included, the beginner magician eager to find the next best trick may pass on the chance to read this amazing book. However, any magician that desires to truly master their craft must read “Vernon Chronicles Volume 4”.

This text offers an in-depth look at the thinking process of one of the most influential magicians of the 20th century. Not only has Dai influenced many young magicians, he has also personally known many great magicians of the past such as Nate Leipzig, Cardini, Malini, Harry Houdini, T. Nelson Downs (The King of Koins), Harry Blackstone, and many others—all of whom are discussed in this remarkable book.