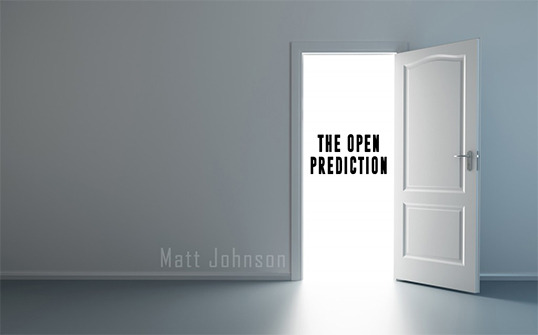 The Open Prediction by Matt Johnson

“I just got this. WOW Matt Johnson nailed it! Worth every penny….

“I just got this. WOW Matt Johnson nailed it! Worth every penny. I love the impromptu version the best!”

“I love when the magic is hidden in plain sight and yet completely invisible. This is a well thought out solution to a timeless plot” – Max Krause

“Matt has created a solid effect. I particularly like the gimmicked version but the other two are equally as strong. I love how he teaches too. It’s like spending an afternoon with Matt!” – Titanas

“Great solutions for this plot and great value for money. I love it!” – Peter Eggink

“WOW, you nailed it! That was worth every penny. I love the impromptu version the best!” – Jeffrey Lockett

“Just watched. Absolutely superb! Cannot get any better than this! Very well put together” – Glenn Moulds

The performer borrows a deck of cards and has the spectator thoroughly shuffle the deck. The performer then makes a prediction by placing a single playing card face up on the table so it’s face can be seen right from the start of the effect, let’s say it’s the five of clubs.

The deck is then handed face down to the spectator who is instructed to start dealing cards from the top of the deck onto the table by turning each card face up.

At any time the spectator can stop on any card and without turning it over deals it face down on the table next to the face up prediction made moments ago.

The spectator may now keep dealing cards face up if they desire to prove there are no duplicates.

When the face down card dealt by the spectator is flipped over it is seen to be the five of spades and matches the predicted five of clubs perfectly!

The deck is now handed back. It’s normal. Nothing was added or taken away and the trick can be repeated instantly!

Read all of that again because every word is a true description of “The Open Prediction” by Matt Johnson!

CONSIDER THE FOLLOWING TRUE STATEMENTS ABOUT THIS EFFECT!

THE DECK IS NORMAL AND BORROWED!

THE SPECTATOR SHUFFLES THE DECK AND THE MAGICIAN DOES NOT ALTER THE ORDER!

A SINGLE PRDICTION CARD IS REMOVED FROM THE DECK AND PLACED FACE UP ON THE TABLE WHERE IT STAYS THROUGHOUT THE PERFORMANCE!

THE SPECTATOR DEALS THROUGH THE CARDS AND STOPS ON ANY CARD THEY WISH. THEY PLACE THIS CARD (SIGHT UNSEEN) NEXT TO THE FACE UP PREDICTION!

THE SPECTATOR CAN KEEP DEALING THROUGH THE CARDS AFTER THEIR FREE SELECTION PROVING THERE ARE NO DUPLICATES IN THE DECK!

THE FREELY CHOSEN CARD IS FLIPPED FACE UP AND MATCHES THE PREDICTION PERFECTLY!

NOTHING ADDED OR TAKEN AWAY FROM THE DECK!

3 VERSIONS TAUGHT IN THIS DOWNLOAD. 2 VERSIONS WITH A BORROWED AND SHUFFLED DECK AND 1 VERSION WITH A GIMMICKED DECK GIVING YOU MULTIPLE OPTIONS FOR THE FINALE TAUGHT IN DETAIL FOR ALL PERFORMING SITUATIONS!

WORKS IN THE REAL WORLD  EXACTLY AS YOU SEE IT NOT JUST IN THE DEMO!

Matt Johnson brings you a very exciting, powerful, real world solution for Paul Curry’s Open Prediction, long considered to be one of the holy grails of magic and mentalism.

It is always ready to go with either your own deck or a borrowed deck. It is easy to perform and delivers maximum impact!