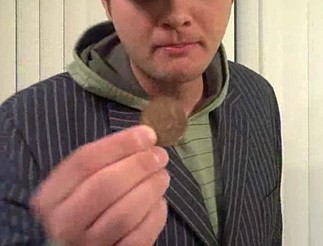 Following the same lead as my last DVD Stand Up Coin Magic this routine is performed all in-the-hands, without a table, in front of your chest. Its always important to perform in front of your chest, and face, so the audience can see your magic and most importantly YOU. PLUS you can perform it for larger groups with greater visibiltiy.

Progressive Wild Coin is a routine I have been performing for over ten years. I’ll never forget the first time I showed it to another magician. I was at a convention and I decided to show it to my friend Jason Alford. After I finished the routine Jason said, ”Get away from me”.

That made me feel good.

A few years back Richard Kaufman asked me to contribute a coin effect to Genii Magazine so I sent him a video of this routine. Richard contacted me a few days later saying that both he and Ray Kosby watched it and “You fooled the $#!% out of us!”

That made me feel great.

This routine really needs to be seen to be appreciated.

Here are some comments from David Acer:

”Years after Frank Garcia popularized the Brother Hamman/Peter Kane card-cloning plot under the name “Wild Card,” coin workers began to see its potential in their own branch of the art. With Fr. Cyprian’s “Wild Coins” (from the 1980 booklet, Stand Up Close) generally credited as the flashpoint, there has since been, if not an explosion, certainly a proliferation of alternate methods from every corner of the world. Now, more than 25 years later, Nathan Kranzo throws his hat into the ring with this lovely stand-up version that features no fewer than three cascading changes, from silver, to copper, to Chinese coins!”

A very odd and old looking copper coin is introduced. This coin is very incredible in that it will CHANGE to match ANY coin it comes in contact with. A silver coin is produced at the fingertips and when the coins touch they instantly and VISUALY change into silver coins. A third coin, a gold coin for example, is produced and ALL THREE coins instantly change into gold.

You end with your hands totally clean.

You REALLY only have three coins and they are examinable.

Can be performed naked.

You may now go into your favorite coin effect.

A few years back on the Genii Forum Mr. Acer chose this effect as one of his favorites. Here it is in his own words:

”I saw Nate perform this before he tipped the work and I was completely fooled. The changes flow logically and beautifully from one to the next, and by the end, the audience is left clueless.”

Now for the first time ever, you can not only watch the routine on video, but learn it instantly.