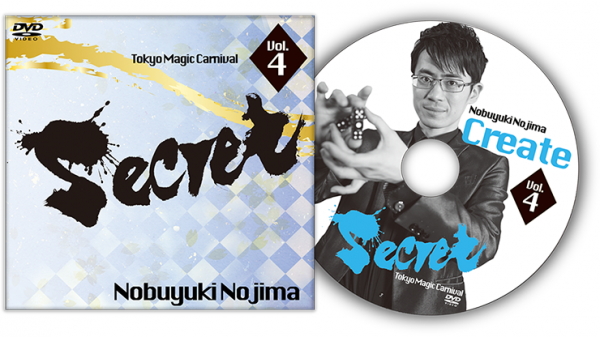 Secret Vol. 4 Ars- by Tokyo Magic Carnival In the world of…

In the world of magic where originality is highly respected, Nobuyuki Nosjima is worthy to be called a genius.

At the age of 15, he created a frenzy when he released his first set of lecture notes. He also caused a media sensation by succeeding in a challenge to create 94 magic tricks within 12 hours.

Nabuyuki’s magic has gained him an impressive, international reputation.

On this DVD, you will find six of his top effects — including material that has never before been released!

This includes his eye-catching “Nojima Mystery”!

Here, the essence of this creative genius will be disclosed, such as how he came up with the gimmicks, how he uses them, as well as his personal performing secrets.

Nobuyuki’s “Oil & Water” is one of the highlights on this DVD. It is truly a masterpiece.

He also includes his secrets on how to increase the audience’s sense of wonder.

This session is packed with secrets to improve your magic AND performing skills.

Change in the Box

Language: Japanese, and dubbed in English