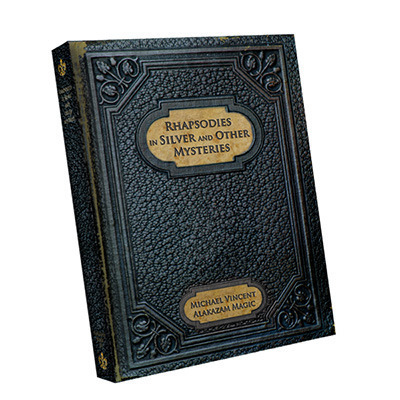 Rhapsodies in Silver and Other Mysteries by Michael Vincent

Enter a world of elegance and sophistication… …where time stops, money disappears…

Enter a world of elegance and sophistication…

…Michael Vincent defies all human logic as the world’s maestro of sleight of hand….


Once in every generation is born an individual whose work becomes known worldwide as a touchstone for excellence. With the hands of an artist and the soul of a poet, Michael is just such an individual.

His sleight-of-hand is masterful, his presentations are inventive and his performances are the epitome of class and sophistication.

As the only magician in history to have won the prestigious title of “Magic Circle Close-up Magician of the Year” three times, Michael has spent the better part of three decades honing his skills to become one of finest magicians that Great Britain has ever produced.

The material on this collection features some astonishing effects from Michael’s repertoire. “Rhapsodies in Silver” focuses on magical effects using coins, while “Other Mysteries” features some of Michael’s favorite card effects.

Volume 2 continues where the first volume left off with Michael taking you on an introspective journey into his world of magic. Over four DVDs, you will be privy to his thoughts, beliefs and values about the craft of magic.

While the focus is on magic with coins and cards, you will also be exposed to a way of thinking, which can take your magic to another level. The pathway to excellence is all about having a road map and the terrain on this DVD has been laid for you to follow.

Michael amplifies his teaching and mentoring with the intention to leave you moved and inspired to become even better magicians. As you watch it, you will experience for yourself why Michael’s stunning presentations are regarded by audiences and fellow professionals alike as some of the very best in the world today.

Disc One:THE LIVE PERFORMANCE:
– The Slot Machine – Coins Across & the Coins through the Table – Match Made in Heaven – Dai Vernon’s “Matching the Cards” plays big. – The Two-Card Monte-Michael’s handling and presentation for Eddie Fechter’s “Be Honest, What is it” – The Mushin Travellers
All routines in the live performance are explained in full, throughout this four-disc set.

A Discussion on Coin Magic with Chris Harding

Including a detailed study of the fundamental coin sleights:

Further sleights: The Coin Shuttle-Thanks to David Regal Vincent on The Ramsay Vanish

My Three Coins Vanish A wonderful sequence that will serve not only as a mystifying piece of elegant coin magic but will enable you to practice all of the discussed techniques in a specific context.

The Right Way to Wash Your Hands: A Study of “The Beat” This is an extremely valuable technique to learn and this is a perfect place to do so.

MV’s Slot Machine
Michael’s handling of a Dr Sawa routine that is a fabulous opener as well as a guaranteed ovation getter. This routine has it all: an engaging presentation, beautiful magic and the classic Vincent charm.

Disc Two: The Close up Show

ROUTINES PERFORMED & EXPLAINED: This collection of effects is a study in powerful routines and staging.

Michael presents a staggering series of effects for a lay audience.

Performance-Card Magic, Up Close and Personal with Michael Vincent

Fooled by a Gentleman

Asthmatic Card Control A wonderful routine to demonstrate your abilities at shuffle tracking and card control.

Watch the video trailer – one of our favorite effects that Michael performed!

A discussion and presentation tips on this classic routine.

An interpretation of A Classic: The Card at Any Number. Michael’s take on this much-explored effect is discussed and explained in full.
Disc Three: The Pathway to Excellence Continued

“It is always a joy to watch you fluidly play with the pasteboards.” Jon Racherbaumer 2009

THE PATHWAY TO EXCELLENCE CONTINUED…

A discussion of how to improve your magic, raise your own standards and how to master and improve the basic techniques in sleight-of-hand.

This is a follow up to the mentoring process started on Volume one. Here, Michael takes you deeper into the dynamics of successful card handling.

The Control – A Further Discussion

The Top Change – A discussion on The Two Card Monte

The False Shuffle – A Discussion on The Zarrow Shuffle

A Match Made in Heaven

A wonderful stand-up version of a Dai Vernon classic!

This will really give you something to work on. If you have studied the intermediate steps then now you can begin the road to mastering a routine that will really test you abilities in performance, misdirection and sleight of hand.

This Alakazam production is the second in an ongoing series…

Lookout for further releases from “The Michael Vincent Collection.”

The Coins through the Table A Study in the Ebb and Flow of Tension and Relaxation. This routine is one of the highlights of Michael’s highly acclaimed Magic Castle Act. Now he shares it with you!

Chink-a-Chink A personalized approach: A classic routine gets the “Vincent Touch.”
The Shattering Coins and Silver Balls: A Tribute to Eddie Joseph A staggering piece of close up coin magic that you have to see to believe! Michael proves once again that attention to detail and mastery of his craft can truly achieve stunningly visual magic.

Michael’s Stand-up Rhapsody in Silver After many requests since the release of the previous collection, this routine from the first live parlour show is now performed and explained in full detail.

The Chain of Excellence

Michael’s magic has been inspired by the work of the great masters who came before him. By working in harmony with the work of the past masters we are able to then realize our own artistic potential. A full and detailed list of credits and inspirational sources has been included on the DVD for your reference and further study. This will allow the chain of excellence to continue…