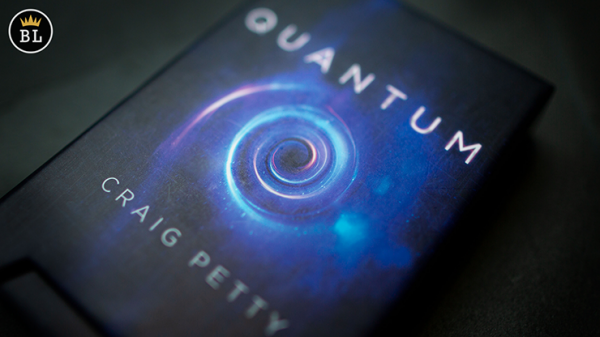 “Quantum Deck” from Craig Petty might just be the holy grail of the Card at Any Number plot. This is as clean and straightforward as it gets. If you had actual magic powers, this is how you’d perform this iconic classic of magic.

Listen, we get it. Magic and hyperbole go together like peanut butter & jelly or Joshua Jay and Andi Gladwin. But, what we are about to describe is truly what happens—as hard as it might be to believe.

You should probably watch “Quantum Deck” in action first though. Check out the full performance in the trailer before reading any further. While you do, please keep two things in mind:

We hope you actually took the time to watch the video. If you did, you’ll understand what we meant about having to see it to believe it. That being said, we’ll do our best to sum it up in words.

What is “Quantum Deck”?

A deck of cards that is clearly blank on both sides is introduced. You let your spectator know that there is only one card printed in this blank deck of cards and the spectator is going to tell you exactly where it is. All they have to do is name a number. This playing card can even be signed if you’d like.

You then cleanly deal down cards, clearly showing every playing card is blank on both sides as you do. They can burn your hands if they want. When you reach their number, they won’t believe their eyes when they see that the only printed playing card in the whole deck resides precisely at the number they chose.

This is strong enough on its own. But, the fact you can then hand the cards out for examination takes “Quantum Deck” to another planet.

It might seem too good to be true. But, it is true. They freely name any number and the playing card is at that position. It’s about as close to real magic as possible.

However, this is still a magic trick. So, there is a method. And we feel it’s important to let you know that while they can freely name any number, if they chose an unusually low or small number, you may need to gently nudge them toward a more workable number. By simply suggesting that you both know their card is closer to the middle, you can discreetly coerce them into “trusting their intuition” and freely naming another number that’s slightly larger or smaller. Everything is extremely fair. And, in many cases, the fact they changed their mind makes things seem even more impossible.

Are the cards really examinable?

That’s one of the many things we love about this effect. But we want to be very transparent with you: the spectators are TECHNICALLY examining a deck that a very astute magician might notice is “gimmicked” after close examination. But, the way Craig has carefully developed this deck allows laypeople to unwittingly handle the deck without finding anything. (If you’re new to magic, you may find this a little nerve-wracking the first time you do it, but, trust us, we’ve experimented with it and think it’s really smart.) Craig even shares a way that you can prepare the deck to potentially fool your magician friends.

Everything is covered in the four hours of instruction, which includes a full hour of live performances both close-up and on stage, as well as in virtual magic shows. You’ll learn multiple bonus routines, ideas and handlings, including how the “Quantum Deck” isn’t restricted to just Card at Any Number. You can perform transpositions, predictions, comedy routines or even use it as a forcing deck. In fact, you don’t even need a playing card at all and can instead use a credit card, business card or even a slip of paper.

This is a super practical worker. It resets in seconds and is perfect for table-hopping close-up magic and street magic, while also playing large enough for stage or parlor magic.

It’s no surprise why some of the smartest minds in magic were truly blown away by how genius “Quantum Deck” is:

“Mr Craig Petty, I have no idea.” Kyle Purnell

“Quantum Deck” is one of Craig Petty’s most cherished creations and he’s thrilled to finally share it with you.

Get your “Quantum Deck” today

MENTAL FOOLER By Joseph B