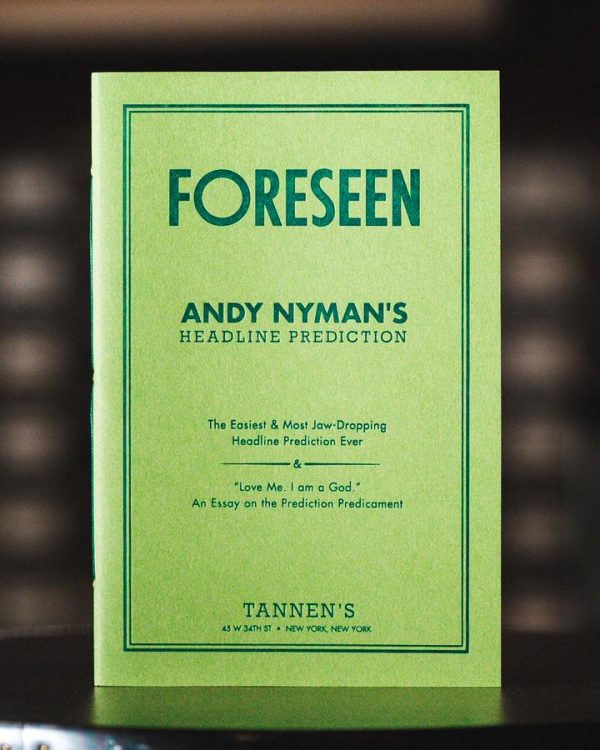 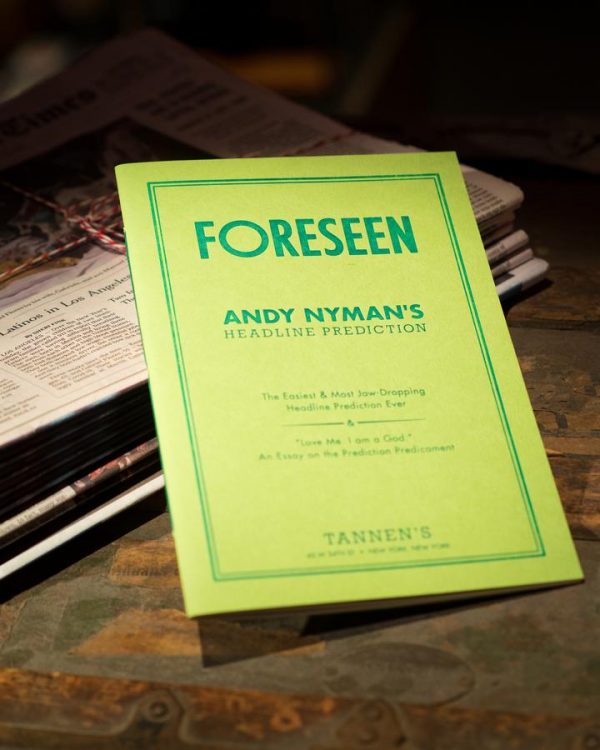 ANDY NYMAN REVEALS THE SECRETS OF PREDICTING THE FUTURE

New York, NY • Lock the door behind you and draw the curtains; some mysteries are meant only for a privileged few. Open the pages of Foreseen and you’ll discover a secret, really a series of secrets, from one of mentalism’s foremost exponents. The pen of Mr. Nyman discloses his reputation-making finale after decades of performance. Kind is he not only to disclose the exact workings of his headline prediction but also the script and every subtlety to elevate the trick to a wonder.

Weeks before the mentalist appears before a gathered audience, an envelope is mailed to the organizer marked “Do Not Open.” At the culmination of a great evening of mindreading and mirth, the organizer is called forward and asked to open the envelope. Reading the contents aloud, the letter, written by the performer, reveals key details about that day’s newspaper. Oh, and there’s a P.S. too.

The gentleman, Mr. Nyman, creates fascination, intrigue, and mystery not through daunting sleight of hand and juggling, but instead through an easy to perform method. The devil may lurk in the details, so Mr. Nyman banishes each detail’s foil with a wave of his right hand. The devastatingly simple method creates profound astonishment.

The booklet is printed, embossed, and hand-bound by a small letterpress up the Hudson from the publisher, Tannen’s Magic. Since 1925 Tannen’s has introduced classic titles to the magic community like Tarbell, Stars of Magic, 13 Steps to Mentalism, and now, Foreseen.

“Andy has enthused about this closing routine for years and it’s a joy to finally see it in print. It’s bold, nuanced, and huge fun; you’ll finish this beautiful booklet desperate to do it. So much of what makes Andy great – and an inspiration to me for so long – is here for you in these pages.” – Derren Brown

“News flash: Here’s how to make the headlines; Nyman delivers the goods so that you can, too!” – Paul Vigil

“He started with a classic, time-tested approach to the headline prediction then shaped it into something new and better. Everyone knows that Andy is a world-class performer, creator, writer, actor and director. What many may not know is that Andy can also be a world-class worrier, which means that he imagined every possible performance scenario, good and bad, then developed smart, powerful and sure-fire ways to eliminate every ounce of risk while increasing the impact and drama. Anyone interested in the headline prediction (or any type of prediction) will benefit by reinvisioning this mentalism classic through the eyes of Andy Nyman.” – Michael Weber

“Andy Nyman is one of the greatest minds in magic. If you don’t know that already, “Forseen” will help you understand why. Headline predictions can be scary. But, one at a time, Andy knocks down every fear you could possibly have, leaving you with a simple method you can pull off with ease, guaranteeing a stunning closer.” – John Lovick

“Tannen’s Magic and Andy Nyman have produced a beautiful pamphlet in a classic style. The method is simple. The effect is powerful. What more could one be looking for?” – Jared Kopf

“FORESEEN is excellent. Andy Nyman’s take on the classic headline prediction is direct, believable, and doable. The routine is well scripted with a touch of humor and self-deprecation that makes for great entertainment. Of exceptional interest is Andy’s closing essay which provides a needed frame for performing plausible mentalism. The booklet is a must-read.” – Ross Johnson

“Andy came up with a very simple method to a classic in mentalism. It’s easy to do and I had a big smile when I read it because I love it so much.” – Lior Manor

“Based on a bygone and bypassed methodology, Nyman has polished the headline prediction to a radiant gem or even a meteor. His ‘in the trenches’ insights are priceless. Though caution and mindset are prescribed for this effect, an intelligent performer has a maximum impact illusion that is miraculous.” – Marc Salem

Be the first to review “Foreseen By Andy Nyman” Cancel reply