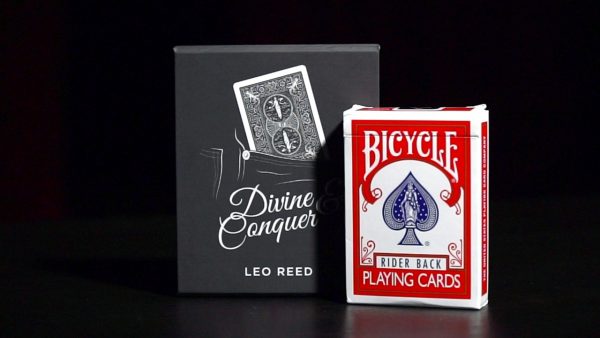 Divine and Conquer by Leo Reed

The most convincing demonstration of mind-reading with a deck of cards we’ve ever seen. Two thought-of cards are found in 2 impossible ways

“So clever and a dream to perform. Thanks for sharing with us such a masterpiece” – Gaetan Bloom

“Leo Reed is a Modernist Chef of magic principles who has skillfully blended a select group of time tested ingredients to create a recipe for deception that will delight you. Divine and Conquer is a great piece of magic.” – Michael Weber

“I can vouch for the effectiveness of Divine and Conquer because I have been performing my own version of this plot for years. I was about to tell Leo Reed he was late to the party when I read his original method, and was tickled to discover he had a different take, coming at the idea from a completely different direction, and had arrived at his own solution that is as direct as it is deceptive. Solid work from a solid guy.” — Eric Mead

Divine & Conquer is one of the most direct demonstrations of mind reading and magic that you can do with a deck of playing cards. Two selections from the spread are merely thought of, yet the magician can name one and produce the other with perfect accuracy and zero sleight of hand. This is Divine and Conquer by Leo Reed.

A deck of cards is fairly spread between the performer’s hands. Two spectators each think of different cards in the spread. No cards are removed from the deck; they only exist in the spectator’s mind. The deck is placed on the table, and then the magician divines the identity of the card from one of the spectator’s thoughts. The other spectator is then invited to deal down through the deck, looking for their card. It has completely vanished. The spectator can even count the cards. There are only 51 cards in the deck. Their card really is gone. The magician then reveals the second thought of card has appeared in their pocket.

Divine & Conquer is a monster trick that requires absolutely no sleight of hand. You will receive a special deck of cards that does all the work for you, along with an instructional video from Nick Locapo that details how to perform this amazing effect. The cards can be different in subsequent performances, so this effect is perfect for both close-up and stage performers who need to wow audiences again and again. Astonish your spectators when you do more than just magic. Rock their world when you Divine & Conquer by Leo Reed.