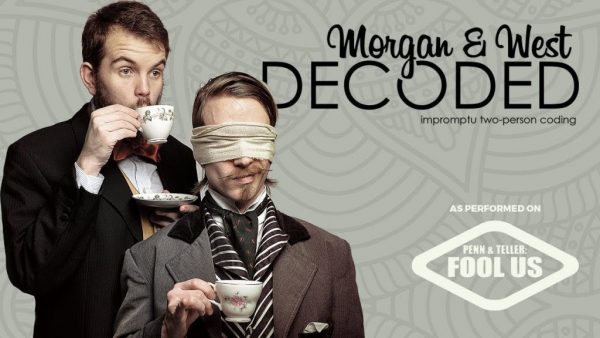 Decoded by Morgan and West

This two-disc DVD Set is unlike any you have experienced…

This two-disc DVD Set is unlike any you have experienced before. On Decoded, Morgan & West reveal the artistry behind their “code” act. You’ll learn how to secretly communicate with an onstage partner to divine serial numbers, the value of pocket change, a randomly chosen word from a book, and much, much more.

But what if you don’t have a partner on stage? The entire of disc one is dedicated to learning their fantastic technique for training absolutely anyone to divine information and objects on the spot, within two minutes. You can key in a friend or spouse to perform magic with you, without any advance rehearsal or preparation, and have the same impact as a professional double-act.

The first DVD focuses on casual coding effects to perform with a friend or spouse as your accomplice, where they can learn the code in minutes, including:

The second DVD contains Morgan and West’s professional code routine, as performed on television shows such as Next Great Magician in the UK and Penn & Teller: Fool Us. They even teach their famously guarded secret of being able to code the number, total value and denominations of coins a spectator holds, plus the last-four digits of their credit cards. Their routine has fooled magicians for years, and now you can learn the full workings!

No electronics or phones are needed; the entire system is based on the words, pauses, and body language you use onstage, and these closely guarded secrets are being revealed for the first time by the inimitable Morgan & West. As one of the UK’s most popular double-acts, Morgan & West perform on stages around the world as Victorian time-travelling magicians. You will see footage from their live show using the techniques on Decoded.

“Morgan & West have come up with a genuine classic in DECODED. Stylish, ultra-clever and probably the best release we’ve had the pleasure of watching in almost 15 years of Magicseen magazine.”Graham Hey, Magicseen Magazine