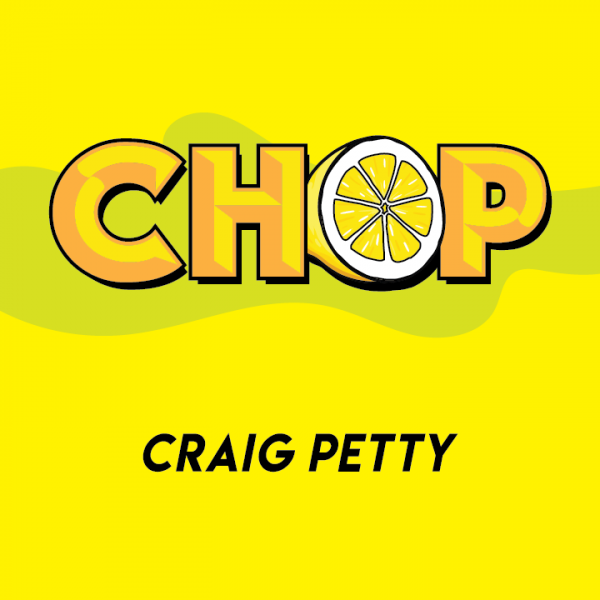 A reputation-maker, and Craig’s signature trick. CHOP is the most deceptive chop…

A reputation-maker, and Craig’s signature trick. CHOP is the most deceptive chop cup routine ever devised, built into the most innocent props imaginable.

“My magic has to be EDC friendly. Chop is the BEST chop cup EVER created because for the finally I can perform this time tested powerhouse piece of magic, anywhere, any time, with anything. It’s breathtaking.” – Lloyd Barnes

Make a signed bill vanish from underneath any cup, and then reappear at your command. Just when your audience thinks you’re out of tricks, a lemon appears inside the cup, and inside the lemon is the signed bill. This is a real worker that gets huge reactions. This is Chop by Craig Petty.

A bill is borrowed, signed, and scrunched into a small ball. An ordinary coffee cup is examined by your spectators. The bill vanishes from the cup, only to reappear with a snap of your fingers. The bill is put back in the cup, and it vanishes again. The cup is placed on the spectator’s hands and impossibly reappears at your command, or the command of your spectator. The bill vanishes again, and when the cup is lifted, a lemon is found underneath the cup. The lemon can be examined and shown to be ordinary. You then cut open the lemon, and inside is the signed bill.

Chop comes with a very special gimmick that allows you to turn any cup and any bill into an instant Chop Cup routine. The Chop routine can be done with any cup, even a paper coffee cup. This has been a worker for Craig Petty for years and is his go-to closer when he really wants to impress an audience. The gimmick has been updated to hide in plain sight and work better than ever. In addition to the killer bill in lemon ending, Craig has also updated the instructions with incredible new moves that make it incredibly deceptive. Plus, you’ll learn additional routine ideas with cards, coins, sponge balls, and other ways to use the Chop gimmick that will truly fry your audience. Craig even teaches some amazing material using the Chop gimmick with a clear glass. Workers will love how practical this gimmick is, and beginners will love how easy this trick is to perform. Once this is in your hands, you’ll never want to leave the house without Chop by Craig Petty.

Be the first to review “Chop By Craig Petty” Cancel reply