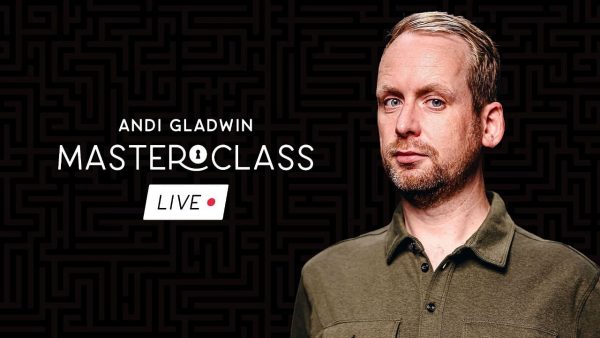 Vanishing Inc. cofounder, Andi Gladwin, is the author of our best-selling book…

Vanishing Inc. cofounder, Andi Gladwin, is the author of our best-selling book of all time (The Boy Who Cried Magic), has been featured on television in the UK and USA, and recently fooled Penn & Teller with a trick he designed specifically for them. He has also traveled the world extensively lecturing and teaching his magic, but now, he’s coming directly to your computer screen with this jam-packed month of Masterclass: Live.

If there’s a trend to Andi’s magic it is clear effects that have streamlined construction with an emphasis on building on little-known nuggets from magic’s extensive history. He’ll demonstrate this by teaching over a dozen tricks and techniques during his month with us.

Week One: Ubuntu & Stacking (June 5th 2022)
Separated into two parts, Andi will talk about the importance of “Ubuntu” and how that helps him shape his own magic routines. He’ll demonstrate this philosophy with unpublished routines including “Collective Cutting,” the most deceptive Spectator Cuts the Aces we have ever seen, a brand-new coin routine that you will want to perform, and his elegant handling of one of Hofzinser’s most famous routines.

After a discussion on practice techniques, Andi will then give you three sleight of hand routines to practice that all give the appearance of riffle stacking the deck without actually stacking a single card. But this session goes beyond technique; he’ll demonstrate how a simple gambling idea can be shaped into a surprising and entertaining card routine.