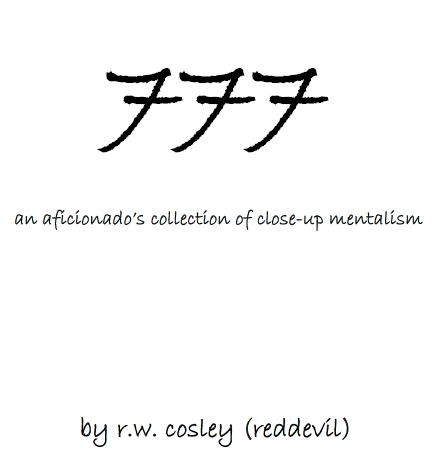 777 – An Aficionado’s Collection of Close-Up Mentalism By RedDevil

Whether you are enamored with prop-less mentalism, ACAAN’s, business card/billet mentalism, or…

Whether you are enamored with prop-less mentalism, ACAAN’s, business card/billet mentalism, or anything in between, 777 has something for everyone.

“Devilish thinking, workable ideas, value for every type of performer…A recommendation from me for a new author and mind that I know that can and will be a contribution for those searching for good knowledge in Mentalism.” –Pablo Amira

“I’ve not had the chance to read all of this yet, but I really liked the Good Samaritan piece that I have read. It was a clever idea and I’ve been impressed in the past with the approach that ‘The Devil’ takes to mentalism generally. I expect the rest of this book to be very good.” –Atlas Brookings

“I actually told hm to NEVER release this [Good Samaritan] over Skype when he showed me. It’s that good! I’m quite upset he has decided to release it since I love it so much!” –Art Vanderlay

“I have marveled at his depth of thinking and approach. In some cases he has taken classic effects and put his own spin on them. In particular I love his Ternbata based on Rich Maue’s “Terasabos.” Armed with just a few business cards, you have a remarkable effect which is a real delight to perform.” –Neil Somerville

“With 777 Robert has put together a great collection of a dozen engaging and fully scripted Mentalism effects which have a bit of something for everyone. The emphasis here is very much on presenting effects that ‘matter’ and have ‘meaning’ to the participants which is all down to Robert’s scripting and his ability to frame each effect in a way that resonates with the audience.” –Laurence Hookway

Effects in the Eyes of the Spectator:

Creaturecard: A spectator thinks of a random creature from the earth, and somehow the performer not only reveals the creature, but apparently an entire scene from the spectator’s imagination. This can be totally billet-less.

LifeLock: For all the cell phone PIN reveal junkies out there, LifeLock has a unique twist in a growing genre. The spectator creates a new “life-code” based on personal events in her life, and the code opens the spectator’s lock screen. Works only with iPhones and is compatible with IOS 8.0. You do NOT need to jailbreak your phone.

Ternbata: A unique take on Rick Maue’s beautiful “Terasabos” using business cards, but works 100% of the time. A great effect to carry in your wallet and an idea you will use for other billet/card routines. Rick honored me with his blessing on this.

Good Samaritan: Another billet-less routine, and it is a bonus effect with some special in-built structures of currency that you may able to use in other routines of your own. The spectator imagines finding a wallet filled with cash, and you tell him exactly how much money is in the wallet. Nothing is written down, and the spectator’s choice of the amount of money is free. Works with US dollars, pounds, or euros. Might be able to be adjusted for other currencies.

Card Camera: This is a mini-book in itself. It is a very simple card c####g system. It also contains a cellphone texting system, a number divination system, and a couple of sneaky ACAAN’s you will like for just the right occasion.

Positively!: Originally published through Pablo Amira, this is my updated and improved 100% full-proof method for the classic Positive/Negative plot. One prediction. No switches. No sleights. No outs. The prediction stays untouched on the table the entire time. Guaranteed to work in English and Spanish only, but it is possible that it could be adapted to other languages.

Deckwavoque: A full-deck equivoque presentation that you will use. Presented as a “Personality Test,” the spectator’s interest will be primed, and by the time they realize they have chosen a card, it will be too late to backtrack.

DeckwACAAN: A truly hands-off ACAAN, and the spectator believes his number and card are freely chosen.

The Willy of Oz: The performer guesses a classic movie from childhood that the spectators were only thinking of in their minds. A psi-force opportunity for use as a thematic “macro-effect.”

The Kiss F##ce: A new number f##ce that has limitless possibilities and maximum interest from your spectator. Works best for USA citizens.

Personality of a F##ce: a re-introduction to the 37 F##ce that gives the apparent control back to the spectator.