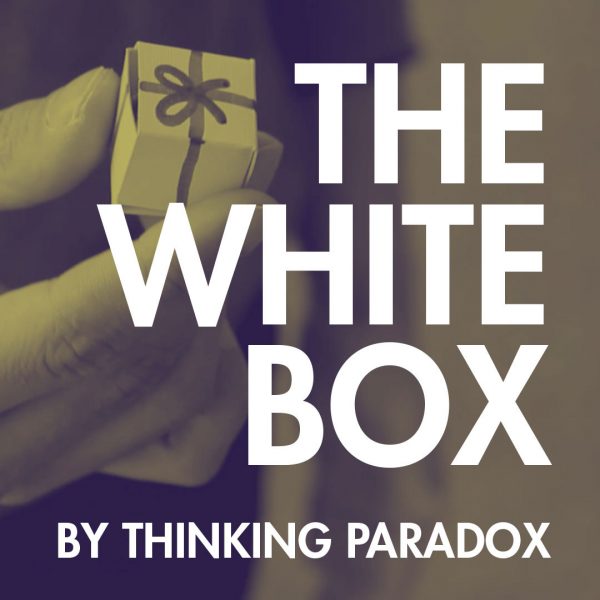 The White Box by Thinking Paradox

From the Thinking Paradox team, creators of bestsellers BOND and CLEAR CHOICE,…

From the Thinking Paradox team, creators of bestsellers BOND and CLEAR CHOICE, comes this new effect.

But this is not just an effect, is more than that. The White Box in fact is a compillation of ideas and routines about a main concept. An imposible coincidence with a rubick’s cube, the smallest sword box in the world… Imagine having the power of a Prediciton Box that fits in your hand palm, with no external helpers. We will teach you 3 different handlings applied on 3 routines, and many other presentation ideas.

Here are some included routines:

An impressive routine plenty of humor which will leave an unforgettable memory in your audience’s mind.

The magician shows a small gift box, which he gives to the spectator to hold it in full view. Now the spectator will have to write a letter to a very special person who lives in The North Pole to ask him for a present. The spectator can choose whatever he wants, with no restrictions. This letter is sent to The North Pole and suddenly, a new character appears on the scene, that’s Santa Claus!

When the small gift is opened the spectator’s desire is written inside!. But not only this, now, the letter which had been sent to The North Pole has turned into a lottery ticket so now the spectator can buy himself his desired present.

An spectator, who is guarding a mysterious object inside his pocket, will have to be able of solving a Rubik’s cube without watching in less than 1 minute. The countdown starts and the spectator strives to manage to do it- but he ends up with an even more mixed Rubik’s cube. The magician now asks him to show the mysterious object he has had inside his pocket since the beginning and it turns out to be a white small paper cube.

When nothing seems to make sense, the magician opens out the white cube and shows that it hides a surprise inside it. When the cube is folded again, it now turns out to be a miniature Rubik’s cube, and surprisingly, all its faces match with the cube mixed by the spectator. An impossible coincidence.

The magician presents a grand little illusion: the smallest sword box in the world. Inside it, it is the little helper, who will be the victim of this effect. One by one, the spectators nail some needles into the box as if they were swords. Will there the little helper survived? It seems unlikely-

An spectator marks in red each injury on the little figure. Some of them are lethal- and to corroborate it, the magician takes an envelope which has been in full view since the beginning and shows that contains a forensic report which matches with the victim’s injuries. Now all the audience is accomplice of this incredible murder!