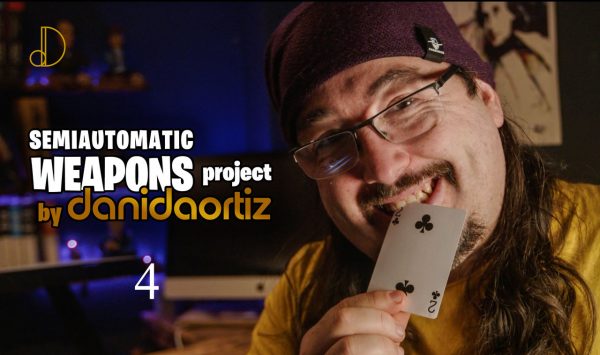 In the fourth lesson of The Semi-Automatic Weapons project, Dani shares with…

In the fourth lesson of The Semi-Automatic Weapons project, Dani shares with you an insane trick where the magician appears to know everything. A deck is shuffled, and the spectator cuts off a small packet of cards. They count how many cards are in their packet under the table. The magician shows the spectator cards from the deck, and to remember the card at the position equal to the number of the cards in the packet they cut off the deck. Suddenly the magician shouts out the number of the cards in the packet the spectator is holding and the name of their card. More impossibly, the trick is instantly repeatable under increasingly impossible conditions. Dani is joined in this lesson by some of his closest friends and students for a session on the incredible principle at play in this Semi-Automatic Miracle.

This lesson, about a half-hour in length, includes an astonishing trick that is powerful by itself. The principles involved in this trick give you the ability to know a card that is merely thought of. Key takeaways for the student include:

Known Position
Knowing the identity of a card at a particular position is a powerful weapon for the card magician. Dani shares with you his method of controlling a key card to a specific position with casual energy that deceives even the most observant spectator.

The Mental Reverse
Adding this technique to Dani’s exquisite work on The Clock Force puts a true miracle into your hand. This is a simple mental task that will give you the ability to know a card that is merely thought of by your audience. Dani might call the trick a very magical stupid little thing, but it’s a piece of incredibly powerful mental magic that will make your audience question if you are from this world.

Lesson Four of The Semi-Automatic Weapons Project continues this comprehensive course in Dani’s thoughts with an impossible piece of card magic your audiences will never forget. This one is not only useful, but it’s also a magician fooler. In addition to Dani’s clever variation on The Clock Force, you’ll learn clever peeks and card positions to apply to all of your magic. You are about to become privy to the secrets that make the magic of Dani DaOrtiz so disarmingly devastating. It’s time to go to school with Dani DaOrtiz in the fourth lesson of The Semi-Automatic Weapons Project.