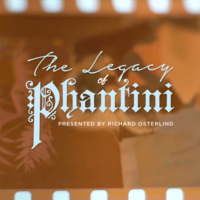 The Legacy of Phantini with Richard Osterlind

Mentalism secrets unknown by even top pros. Learn SIX polished professional miracles in this nearly 3 hour course. Each chapter is a showpiece.

“Phantini released some of the most overlooked and powerful mentalism. Those original booklets found a permanent home in my library and are a constant source of inspiration. I’m excited that Richard Osterlind is bringing some of this material to a whole new generation of Mentalists. If you know Richard Osterlind, you already know what a great teacher he is. Don’t miss this one!” – Patrick Redford

“As a young mentalist I was very inspired by the work released by Phantini. I know that he was also an inspiration to Banacheck and so many other top mental performers that you know and love. I am excited to see that his work is being brought back to life in a new medium for performers all over the world to be able to discover the incredible secrets of Phantini.” – Paul Draper

“You’re basically paying one of the best-known mentalists in the world to spill the beans on a ton of little-known techniques. I’m going to use this material to fool my mentalist friends!” – Michael Kent

Phantini was one of the world’s most successful performing mentalists in the 50s, 60s and 70s. His material was ahead of its time, and as devious as it was bullet-proof.

Unknown to even today’s top pros, Phantini’s mentalism has been studied, modernized and further polished by one of the most successful and influential mentalists alive today, Richard Osterlind.

With their forces combined, you’re getting underground secrets, combined with modern techniques, all presented by one of the most experienced TEACHERS of mentalism in the world.

Included in this product are SIX full-length polished routines, including a bonus book-page forcing technique that alone is worth the price of admission.

Incredible Insight #2
A paper bag and seven or eight pieces of paper from a newspaper. A volunteer selects a portion of the newspaper, crumbles up the piece of paper and tosses it in the paper bag. After that all of the other pieces are crumbled up and tossed in the bag and mixed. The mentalist then reaches in the bag and pulls out the exact piece that the spectator chooses and also reveals a thought of word from that piece of newspaper.

Phantini’s Magazine Miracle
Someone chooses a page freely from a magazine with a playing card. They put an X on that page. Another spectator looks at the X and chooses a word where the X has been made. With all those random choices their chosen word matches a prediction that has been in full view since the beginning of the routine.