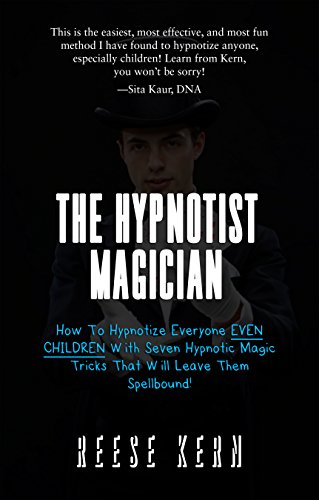 The Hypnotist Magician: How To Hypnotize Everyone EVEN CHILDREN With Seven Hypnotic Magic Tricks That Will Leave Them Spellbound! by Reese Kern

When I opened my first hypnosis office I was in my early 20s. I was fresh out of hypnosis trade school, and excited, but more nervous, and you get the point. Anyway, I will never forget my first client.

She was a little girl, very nervous, and her parents seemed very at odds with taking their young daughter to see some hypnotist to help her with a problem she’d been having. They had been referred by a mutual acquaintance, but not one I knew very well.

I have to tell you I wasn’t prepared for a child client. I instantly and intuitively knew that the techniques I’d been taught weren’t going to work with this young girl. Getting her to imagine walking down a peaceful path with beautiful sunrays beeming down on her wasn’t going to cut it.

In highschool I had taken up magic. After graduation I became so mastered in magic that I actually began performing street shows and small venues on the weekends. I actually earned a nice sum of money, which later went to my hypnosis training, but that’s another story in itself.

The young girl laid down in my comfortable hypnosis chair, her mother sat in one back corner of my office, her father the other, and the look her father gave me caused sweat beeds to deposit on my forehead. It was a small office anyhow and the four bodies didn’t help my comfort level.

I needed help, but there was none. I couldn’t screw this up or else my reputation in this small town would be ruined forever. It was one of those small towns where everybody knew everybody and they talked. Did they ever talk!

I decided to do something totally radical. I decided to hypnotize her with a magic trick I figured I could use to hold her attention. When I mentioned a magic trick the little girl’s face came alive and her nervousness left instantly. Mind followed.

I was comfortable with magic. I had performed in front of live audiences and it was…well…what I did.
I took the principles of hypnosis and applied it to the magic trick. I very much so wanted to help the little girl, so I prefaced to her that the hypnosis would come during the magic trick. I gained her confidence in me and thus gained greater confidence in my ability to help her. Something happened.

I became a natural hypnotist, forgetting my lack of experience, everything I had thought about myself up to that point, and something inside of me snapped and I became first class instantly.

The little girl became hypnotized and entered a deep hypnotic trance and I was able to give her suggestions and they worked. Her life changed after that, and the respect I received from her parents turned into hundreds (if not thousands) of referrals over the years I was in private practice.

I have found one of the easiest ways to hypnotize anyone is through the application of magic tricks. In this book I will explain seven magic tricks to you that work well. I’ll give you everything you need to know to apply them, including why you should use each one, what you must know upfront, how to do the trick, other applications, frequently asked questions students of mine have asked regarding each trick, and some action keys to help you proactively take charge and use the trick to discover how easy applying magic can be.
Many people over the years have asked me, “Why magic tricks?”

Grab your copy now! You’ll love it! You’ll use it

Be the first to review “The Hypnotist Magician: How To Hypnotize Everyone EVEN CHILDREN With Seven Hypnotic Magic Tricks That Will Leave Them Spellbound! by Reese Kern” Cancel reply