“3 Ways to Fool a Magician By Luca J. Bellomo” has been added to your cart. View cart
Back
$1.99The Drawing Room by Paul Lelekis
Magic Tricks New Arrivals

The Drawing Room by Paul Lelekis

6 beautiful effects that are Stronger than The Hulk! When I was… 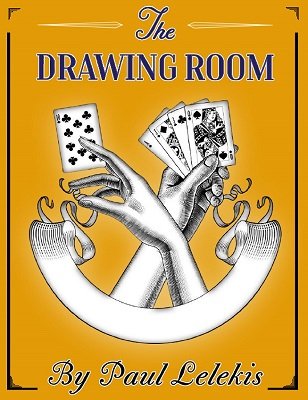 6 beautiful effects that are Stronger than The Hulk!

When I was a kid, I purchased magic books from the 1800s by Prof. Hoffman, Herrmann, Jean Robert-Houdin, and a host of other magicians who I’ve never heard of before…these books were old, with very yellowed, brittle pages, with art-work that was quite intricate and very Victorian.

But what stood out most to me, were how many times these books would mention performing in, or retiring to “the drawing room”…this term really intrigued me.

These stellar effects within, will “spark” those magical times in your lives that have lasted us for so many years!

Leave Those Jacks Alone! – This fun-filled adventure will drag your spectators into your world! You have the spectator FREELY select four cards and then she signs a fifth card. Remarkably, the signed card visibly transposes from the packet, into the deck! This amazing transport is easy to do and the four selections are shown to be the four Jacks…which you JUST told her NOT to pick! You’re gonna LOVE this one!

Strike Three? – The pressure is on the spectator…but she finally finds her own card in an impossible way. This one is very easy to do…and appears so very magical!
The “construction” of this effect will delight the REAL magicians out there…it is VERY, VERY CLEVER!!

An Even Lazier Lazy Man! – You are going to LOVE THIS!! This is a classic of magic that Paul has revised to make it infallible! Remember the old method that goes on and on and on? Well not anymore! Paul has revised this classic of magic so that it is not only far easier to perform, but also gives the performer full control…unlike the classic version!

Cutting Deeper – A classic by Bro. John Hamman brought into the 21st Century…this is amazing and fun to perform! You AND the spectator cut to the four Aces!

No Way…Way! – A prediction is written. The spectator shuffles a deck of cards then deals out as many cards as she wishes. She divides these cards into two piles and removes either pile! (There is NO FORCE!) Then an elimination of cards is performed and she picks either of the last two cards – that’s right, it is the prediction! This easy-to-do effect will fool everyone…including magicians! LOVE this trick!