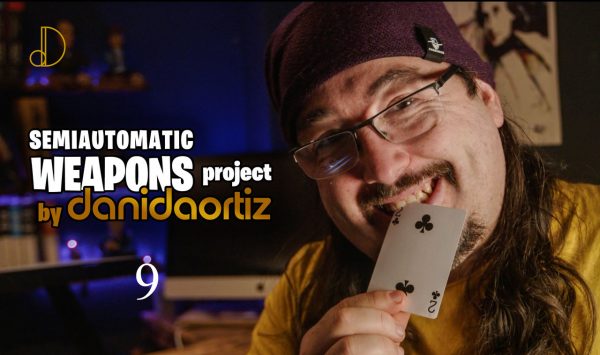 Dani DaOrtiz shares with you a fantastic card revelation that is also a masterclass in teaching a magician to discretely obtain information in real time. The effect begins when the deck is shuffled by the spectator. They take half the deck and then think of any number between one and twenty and deal a pile of cards equal to that number in front of themselves. They look at the card they dealt to; the magician mirrors their actions having another spectator remember a card from their packet. The magician and the spectator further mix their packets, losing their cards in the deck. The magician has the second spectator remove their card from the deck and reinsert it into their pack face up. The two packets are squared and dealt through, and impossibly when you come to the face-up card the thought of card the first spectator selected is in precisely the same position as the second selection in the magician’s pack. It’s unbelievable.

This lesson is just under twenty minutes in length, but don’t let its brevity scare you. It’s packed with incredible techniques and subtleties that will level up your magic. Key takeaways for the student include:

Peripheral Vision
Dani shares with you the real work of using your peripheral vision as a secret weapon in your card magic. You will learn how to engage with your audience while picking up key details out of the corner of your eye. This has been one of Dani’s best tools for fooling magicians and laypeople alike, and now you get to add it to your arsenal.

Advanced Ireland Shuffle
The effect you learn will allow you to put The Ireland Shuffle in your spectator’s hands. This false shuffle gives people the feeling of a deck being thoroughly mixed but maintains the position of a card hidden inside the deck. Dani will be sharing with you new thoughts and theories that make this deceptive sleight a powerful tool.

Synchronized Revelation
The effect that you learn along the way is incredibly powerful. Combining the use of your peripheral vision with the Ireland Shuffle makes for an effect that looks like the magician couldn’t have any control over the cards. This is one of Dani’s favorite effects, and you can see the incredible reaction it gets from the knowledgeable magicians Dani performs it for.

Lesson Nine of the Semi-Automatic Weapons series features incredible theory along with an important lesson in discretely using your peripheral vision to gain valuable information during the performance of an effect. These powerful principles are a glimpse into the brilliant effects that Dani uses to astonish audiences across the globe. You are about to become privy to the secrets that make the magic of Dani DaOrtiz so disarmingly devastating. It’s time to go to school with Dani DaOrtiz in the ninth lesson of The Semi-Automatic Weapons Project.